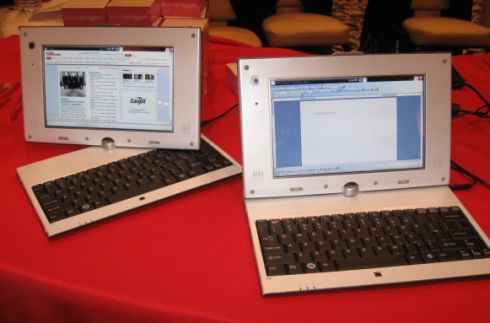 There’s no doubt that netbooks represent the fastest growing segment of the PC industry today. And I expect them to become even bigger over the next few years. 12 months ago, almost nobody knew what a netbook was, but today you can find them in a number of retail stores, order them from most computer makers, and even get them from some wireless phone carriers. When you mention the word “netbook” to your friends, their significantly less likely to give you a blank stare than they were a year ago.

But I’m still a bit skeptical of some of the predictions that analysts and industry insiders are throwing around. Market research firm iSuppli predicts that netbook LCD shipments will quadruple to 47.4 million by 2012. Meanwhile, Qualcomm CEO Paul Jacobs says he expects netbook sales to surpass notebook sales eventually.

I’d take both these claims with a grain or two of salt. The former because iSuppli is including 12 inch display panels in its estimates, and the latter because Qualcomm doesn’t make chips for traditional laptops, just cellphones and netbooks.

I’m not saying that netbooks won’t continue to rise toward worldwide dominance. I just think it’s dangerous to make predictions about the netbook/notebook landscape will look like four years from now when netbooks have only been on the market for about a year and a half.

There’s certainly a case to be made for netbooks replacing notebooks. They’re cheap, light, and portable. Laptops were originally designed to be the computer you could take with you when you left the house. They weren’t really meant to replace desktop PCs. But now full sized laptops are so powerful that for many people there’s not much reason to keep a desktop and a laptop in the same household. But they’re still kind of big and heavy and if you’re looking for something you can really just throw in your bag and go, netbooks fit the bill. You can leave your notebook at home… or just replace it with a more powerful, cheaper desktop.

I frequently point out that I wouldn’t really recommend buying a netbook as a primary computer. But that’s not to say that I wouldn’t recommend it as a primary laptop… if you already have a more powerful computer sitting at home. Of course, maybe I’m understimating the number of people who want to run PhotoShop, edit videos, or do other CPU intensive tasks while sitting at Starbucks.