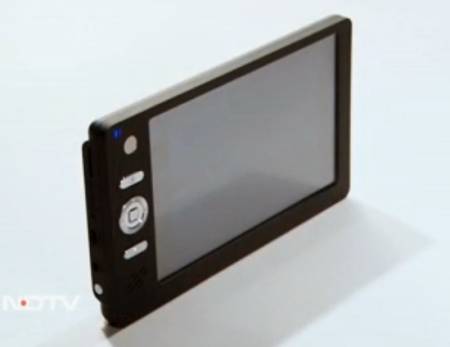 Think that new $199 Amazon Kindle Fire tablet is cheap? Indian officials plan to launch a tablet for students on October 5th that will be available for just $35.

We’ve been hearing stories about the cheap Indian tablet since last summer — and it’s not the country’s first foray into cheap computers. Officials promised a $10 laptop way back in 2009, but it turned out to be just an inexpensive computer without a keyboard or monitor.

The new tablet, on the other hand, appears to be a real tablet. At least, we’ve seen prototypes pop up a few times over the past year or so. It’s expected to have a 7 inch  resistive touchscreen display, a USB port, WiFi connectivity, and a camera. The last I’d heard, the Indian Government was working with HCL technologies to produce the tablet.

Earlier this year there was a report that it cost closer to $125 than $35 to build the tablet, but I wouldn’t be surprised if costs have come down considerably since then. Over the past few months it’s become pretty common for inexpensive tablets to go on sale for $100 or less. Since India is targeting the education market, I also wouldn’t be surprised if the government ends up subsidizing the cost of this tablet a bit.

I don’t expect the $35 tablet to be a very good tablet. I suspect it will have a slow processor, a lousy display, and other features that make it much less fun to use than a high-end tablet. But the goal isn’t necessarily to provide a tablet that’s fun to use… but rather, one that provides students with tools to connect to the internet for research, communication, and other activities in a country where many people might not otherwise be able to afford a computer and internet access.