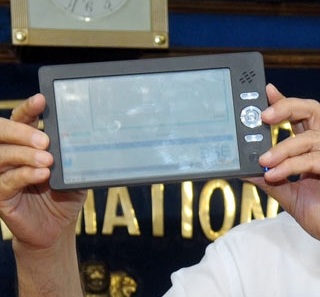 Sure, the Apple iPad may having a starting price of $499, but that doesn’t mean you have to spend half a grand to pick up a tablet computer. The government of India has unveiled a handheld tablet that it says could sell to students for about $35. And believe it or not, it’s not made of paper.

We don’t have detailed specifications yet, but the tablet will apparently have a touchscreen display, 2GB of storage space, WiFi, USB, and a low power processor that uses just 2 Watts of power.

Oh, and that $35 price tag? It’s not the final price. India is hoping that eventually the tablets could sell for as little as $10.

If the price seems a bit outlandish, keep in mind that the government may be subsidizing the cost a bit — and Chinese companies are already pumping out tablets that retail for as little as $100. But I still wouldn’t be totally surprised if someone eventually explained that the $35 just pays for the motherboard, processor, and memory in these Indian tablets, not the screen and casing.

Update: Not surprisingly, it looks like there’s some evidence that the tablet is running Google Android, although it’s not clear if this is what the final units would ship with.