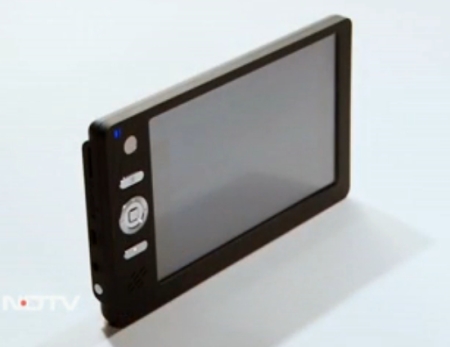 Still skeptical that India is going to be able to follow through on plans to deliver a $35 tablet? So am I. But that didn’t stop Indian Human Resources Development Minister Kapil Sibal from going on the Gadget Guru show to discuss the project. And he promises that in 2011, the Indian government will put 1 million of these cheap tablets into the hands of students.

To be fair, what he’s claiming is that the government can place an order for 1 million tablets priced at $35 each. That’s not the resale price. That’s the wholesale price. Right now there are no plans to sell these tablets directly to consumers. It also seems to imply that a smaller organization or company that placed an order for say, 10,000 units probably wouldn’t get that kind of ridiculously low price.

So maybe the $35 price tag is kind of plausible. The Gadget Guru experts also point out that while the tablet works reasonably well running Google Android, the resistive touchscreen wasn’t all that responsive. Again, I’m more inclined to believe a product like this is real when I discover that it has some flaws.

Still, it has a SIM card slot and it’s said to have 3G as well as WiFi capabilities. And I still can’t help but feel like an Android tablet with a 7 inch touchscreen, 3G and WiFi might be a bit much to expect for $35 — even when you order a million units. After all, the thing still needs storage space, memory, and a processor. It may or may not also have a front-facing camera.

You can check out the video after the break. The good stuff starts about 2 minutes, 30 seconds in.