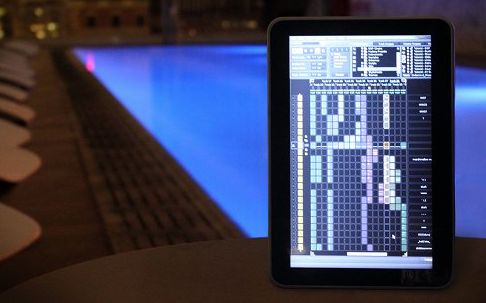 Low cost tablets with low power processors are hot these days, but despite the success of consumer-oriented devices which run mobile apps and surf the web, tablets can be useful in a variety of different contexts. HP sees its Windows-based HP Slate 500, for instance, working well in retail settings or restaurants, allowing workers to take inventory, enter orders, or input other data from the business floor. Now a company called Indamixx is working on a slate for a different audience: Musicians.

Indamixx already offers netbooks and notebooks with custom Linux software and a suite of applications for creating and editing music. Now Create Digital Music has a first look at the company’s upcoming tablet.

The computer has an Intel Atom processor, 2GB of memory, 3 USB ports, VGA, Ethernet, and mic and headphone jacks. Basically, the tablet is pretty much a netbook with extra RAM and no keyboard. But with the right touch-friendly music production apps, you might not miss the keyboard at all. The operating system is based on MeeGo Linux, which is already optimized for small screen devices with Intel Atom chips.

The tablet won’t actually be available for purchase until May, 2011, so there’s plenty of time for the specs, software, and other elements to change. There’s no word on the price yet, but it’s kind of hard to set pricing on this type of device this far in advance.

Just don’t expect it to be dirt cheap. While it’s true, Indamixx products are often based on open source software, the company brings a lot of expertise to the table when developing software for its mobile computers, and that’s what you’re paying for. If you know your way around Linux and open source audio software you might be able to build your own portable music studio from an existing mobile tablet. If not, the Indamixx solution might be worth checking out… eventually.

You can find more details about the hardware and software at Create Digital Music.

6 replies on “Indamixx to launch Linux-based tablet for musicians”