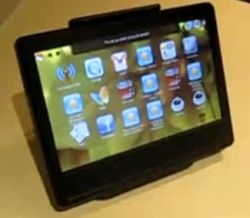 The folks at TechCrunch aren’t the only ones interested in creating a portable tablet PC for accessing web pages and web apps. Olivier Seres has posted a video showing a prototype of a new device he’s calling the iFrame. Basically, it’s an Amtek T10L tablet PC with a custom Linux-based operating system designed to make accessing web pages as quick and easy as possible. Seres isn’t the only person to have this idea, but his software stands out in that it’s custom built for touchscreen devices like the Amtek T10L.

Eventually, Seres says he would like to be able to produce a consumer device like the iFrame running the custom operating system. But first he would need to settle on the hardware. Right now the T10L is one of the cheapest slate PCs available, but it still ocsts over $600 when you order in bulk (the computer isn’t available to the public yet).

Seres does plan to make the software available for download eventually, so that users can test it out and provide feedback.

You can check out the video of the iFrame prototype in action after the break.

One reply on “iFrame tablet is designed for web browsing”