The LG G5 smartphone is one of the few flagship smartphones launched in 2016 to feature both a removable battery and a microSD card slot, both of which could help extend the lifespan of the device by letting you replace a dying battery or add extra storage.

But the phone’s standout feature isn’t just that you can swap out the battery… it’s how you do it. The phone has a “unibody” design, which means that you can’t pop off the back cover to take out the battery like you could with older phones. Instead, there’s a module on the bottom of the phone that you can remove to slide out the battery… and the module also makes it possible to connect accessories like a camera grip or HiFi audio attachment.

But when the folks at online repair shop iFixit tore apart the LG G5, they found that other modular components inside the phone that should make the G5 easier to repair than most other phones on the market. 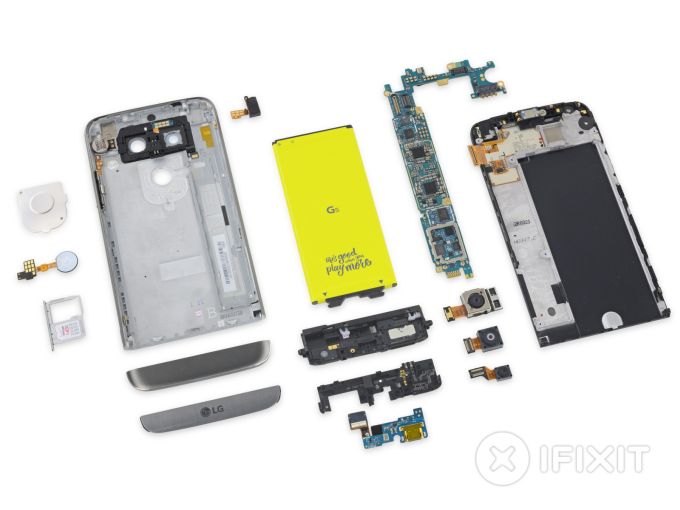 For instance, the same module that you remove to get at the battery has a USB port. That means you don’t need to replace the phone or even take it apart to simply replace a bad USB connector. You could just remove the module and repair or replace it altogether.

The display assembly can also be disconnected from the rest of the phone by removing two screws, which could make it relatively easy to replace a cracked screen (although the display and LCD are fused together, so while this would be an easy repair, it wouldn’t necessarily be an inexpensive one).

Other components including the cameras are also modular, which means that once the case is open, it should be fairly easy to remove and replace a bad part. Overall, iFixit gives the phone an 8 out of 10 score for repairability.

Odds are that most people aren’t going to rip apart their phones and try to repair them… but it’s nice to know you can if you’d like to hold onto your device even after some of its components break or degrade over time.

The LG G5 isn’t the most modular/repairable phone available. But it’s certainly up there. You can find more details (and photos) at iFixit.