The Microsoft Surface Pro is basically what you get if you take an ultrabook, throw it in a 10.6 inch tablet case, add an active digitizer and stylus, and call it a day. It’s a computer in a sleek, compact package which offers decent performance and less-than-stellar battery life.

But it’s what’s on the inside that counts, right?

The folks at repair shop and community iFixit took apart the Surface Pro to find out. 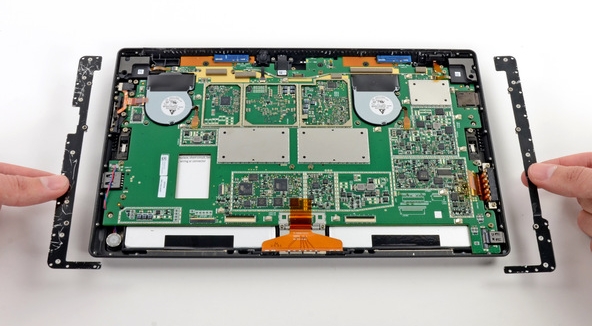 While there aren’t many surprises under the hood, the iFixit teardown does reveal that the tablet has a RealSSD C400 solid state drive with read speeds of 500MB/s and write speeds up to 95 MB/s.

The teardown also reveals that the tablet is awfully difficult to take apart.

Microsoft’s design includes an awful lot of adhesive, which means that in order to rip open the device you need to use a heat gun to melt the sticky stuff before prying off the screen — and this could damage the tablet if done improperly.

Inside the case there are about 90 screws holding various components in place. If you’re trying to repair a specific component you probably won’t need to remove every screw, but depending on what you’re looking for you might give your screwdriver arm a bit of a workout.

All told, iFixit gives the Surface Pro a repairability score of 1 out of 10 (with 10 being the easiest to fix). The cheaper Surface RT tablet, on the other hand, scored 4 out of 10.

One reply on “iFixit disassembles the Surface Pro, doesn’t recommend trying it at home”