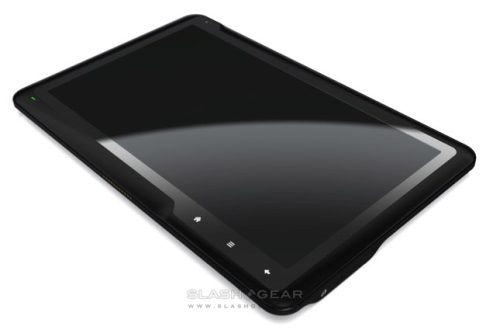 OK, so the JooJoo doesn’t look like much of an iPad killer. But it’s hardly the only touchscreen tablet coming to market this year. ICD was showing off a 7 inch tablet with next-generation NVIDIA Tegra graphics at CES in January. And now the company is introducing a model with an 11.2 inch display called the ICD Gemini.

The Gemini has a 1GHz ARM-based Tegra processor with support for 1080p HD vido playback. It also packs a 3G modem for data connections — and for making phone calls over a cellphone network. The ICD Gemini also sports 802.11b/g/n WiFi, Bluetooth, GPS< and FM Radio. About the only thing that’s missing is WiMAX.

Unlike some other tablets we could mention, the ICD Ultra is also big on expansion options. It has an SD card slot and a MicroUSB port. And it has 2 cameras. One is a 2MP webcam for making video calls, while the other is a 5MP camera with autofocus capabilities for taking photographs. It has 512MB of RAM and between 4GB and 32GB of flash storage.

The tablet has a 1366 x 768 pixel multitouch display and runs Google Android. It should support Adobe Flash by the time the Gemini is released.  No word on a launch date or price yet.