A few years ago IBM started offering a free office suite called Lotus Symphony. It’s based on code from OpenOffice.org, but IBM has forked the project and created a custom user interface and other tools. 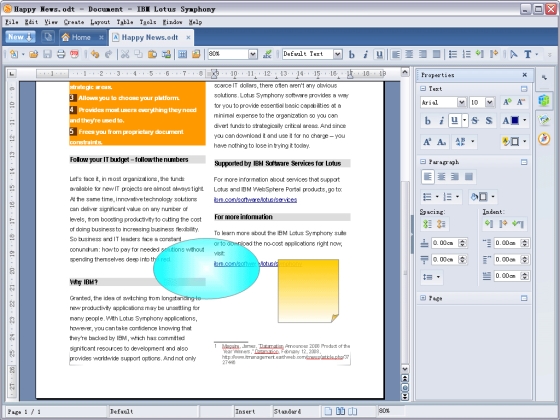 Last month IBM released Lotus Symphony 3.0.1 with a number of improvements including support for bubble charts and up to a million rows in spreadsheets.

But version 3.0.1 will probably be the last version of Lotus Symphony based on IBM’s own code. Last summer IBM announced that it would start working with Apache on OpenOffice.org, contributing code to the mainstream version of OpenOffice.

While IBM will continue to offer support for Lotus Symphony for the next few years, the next free office suite the company will offer will likely be an IBM Edition of OpenOffice.org based.

That doesn’t mean OpenOffice.org will be the only game in town though. LibreOffice spun off a while back and offers free office software for Mac, Linux, and Windows. And web-based office suites such as Google Docs and Zoho have been gaining steam. Even Microsoft offers a free web-based version of its Office software now.