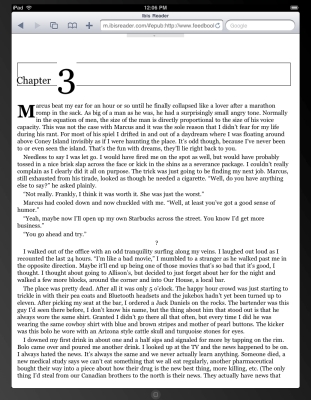 There are well over 100,000 apps in the iTunes app store. While they’re designed for the iPhone and iPod Touch, these apps will work on the iPad the day it starts shipping (which should be in just a few weeks). But Apple’s tablet has a larger display, faster processor, and a few other tweaks under the hood, so it’s likely that we’ll see a lot of brand new applications for the iPad in the App store soon.

But you don’t have to wait until then to start testing out new iPad apps. Because some are available to use right now. There’s a web-based eBook reader called ibis Reader which you can use to read books from a PC, iPhone, or Android device. And the company has announced that there’s now a version of ibis Reader that’s been optimized for the iPad.

Basically, the web app uses HTML5, which means you don’t need to install anything on your device to use the app — although the web app does recommend adding a shortcut to your home screen. When you create a free account and login, you can download public domain and free books from Feedbooks. You can also upload books in the EPUB format to the ibis Reader web site, allowing you to read them on any supported device.

Of course, calling ibis reader the first eBook reader for the iPad is sort of like calling web apps such as Yahoo! Mail or Google Maps some of the first apps for the iPad — because they’ve been around for years, but you’ll be able to use them. Still, it’s good to know that app and web developers are already preparing to make Apple’s first entry into the tablet market a useful device.