Indian device maker iBall and Microsoft have unveiled  new PC-on-a-stick which is set to launch in India in July. The iBall Splendo basically looks like yet-another variation of the Intel Compute Stick, but there are a few things that make this model stand out.

First, iBall says it was developed in partnership with Microsoft. And second, unlike most devices in this category, the tiny computer will be sold with a wireless keyboard and mouse.

The iBall Splendo features an Intel Atom quad-core processor, Windows 8.1 software, 2GB of RAM, and 32GB of storage. It has an HDMI connector on one end, allowing you to plug the computer into a TV to run Windows on a big screen.

There’s also built-in WiFi and Bluetooth, a microSDXC card reader, a full-sized USB port, and a micro USB port (for power). Unlike the Intel Compute Stick, the iBall Splendo is fanless which means it won’t just be quiet while it’s in use… it should be silent. What remains to be seen is whether the lack of a fan will cause the system to get hot enough to affect performance.

Like other PC sticks, the iBall Splendo is designed to turn any display into a computer… but it’ll be a relatively slow computer. The Atom chips used in these systems are the kind of processors you’d normally find in cheap Windows tablets or low-cost laptops, not high-performance computers. 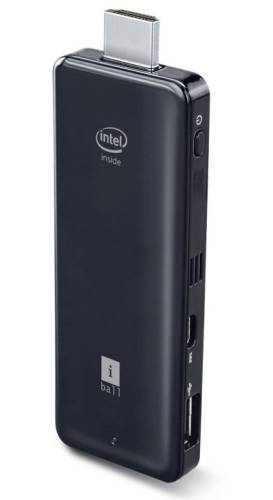 via ET and TNW