Earlier this month I decided to replace my aging (and wonky) Fitbit One activity tracker with a Mi Band 4. I picked one up from Amazon for less than $35, but they’re also available from other retailers including Walmart and Newegg.

I spent less on a brand new Mi Band 4 than I had on a refurbished Fitbit One in 2016. And while my new tracker doesn’t have an altimeter for tracking stair climbing, it does have a color screen, a heart rate sensor, sleep detection, smartphone notifications, and insanely long battery life.

In fact, I haven’t charged the Mi Band 4 since the day I first took it out of the box. 22 days later, the battery level finally dipped below 30-percent. 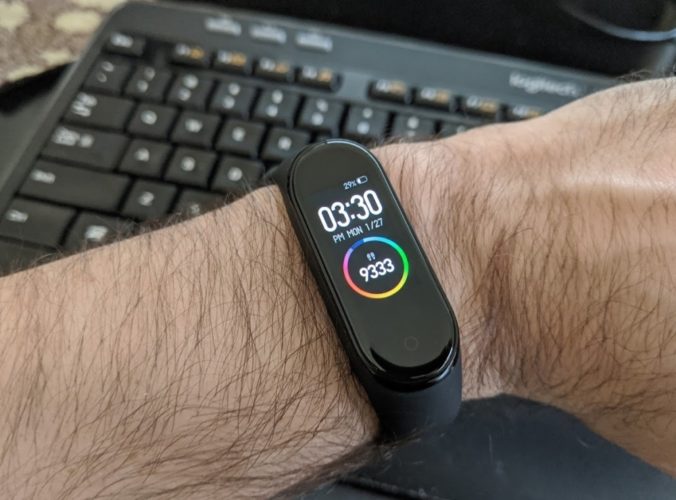 To be fair, I’m not using all of the Mi Band 4’s features all of the time. I’ve only tried sleep tracking a couple of nights — long enough to decide that wearing a wristband to bed might actually contribute to restlessness when you’re not used to wearing one. And after enabling automatic heart rate monitoring for a few days, I decided to only measure my pulse manually.

Enabling one or more of those features will likely reduce battery life.

But it’s not like I’m not making use of my Mi Band 4. The wristband syncs with my phone constantly so that my step count is saved to the Mi Fit app running on my smartphone, and the Mi Fit 4 can vibrate and to alert me when I receive an SMS or WhatsApp message. I can view those messages at a glance by looking at my wrist while my phone stays in my pocket, and I can raise my hand at any time to see the time, date, and my current step count.

The Mi Band 4 can also function as a remote control for media playing on my phone, display a brief weather forecast, and notify me of weather alerts. There are also alarm, timer, and stopwatch functions. And if I misplace my Mi Band, I can press a button in the smartphone app to make the activity tracker vibrate. There’s also a “find device” option on the Mi Band that I can use to make my phone ring to help find it if it’s been misplaced. 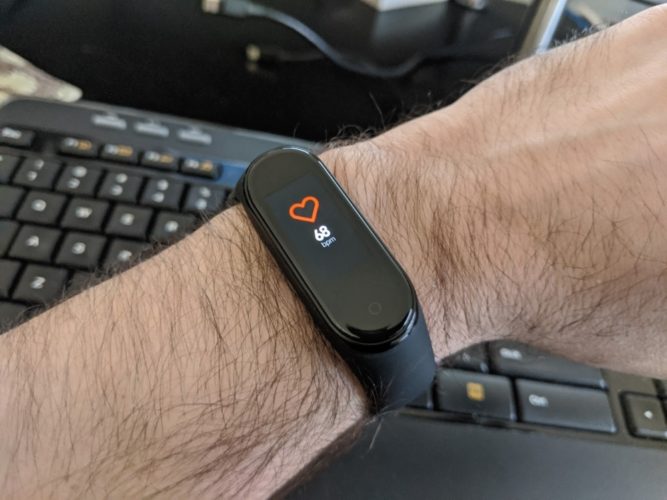 But really it’s the battery life that’s a key selling point for me. When I bought my Fitbit One, it was able to run for around 5-7 days at a time on a charge. A few months ago battery life dropped to 1-3 days… and some days it wouldn’t last through a full day.

I’m pretty sure that was a result of a bad software update rather than natural battery degradation over time. But month after month I waited for Fitbit to roll out an update that would resolve the issue, and it never came.

So I started contemplating my options for a replacement. I do like having an activity tracker I can clip to a belt rather than wear on a wrist — I have a treadmill desk in my office so I sometimes walk and type at the same time, which means my legs are moving when my arms are not. Wristbands also don’t do a great job of counting steps when you’re on an elliptical trainer.

The Fitbit Inspire does work with an optional clip. But I’m a little sour on Fitbit at the moment. So I tried to see if anyone sells clips for other activity trackers. The Garmin Vivofit 3 does seem to support belt clips, but I haven’t found any for the newer Vivofit 4. And while the 1-year battery life does sound nice, I’d prefer a rechargeable battery to one that eventually needs to be replaced. 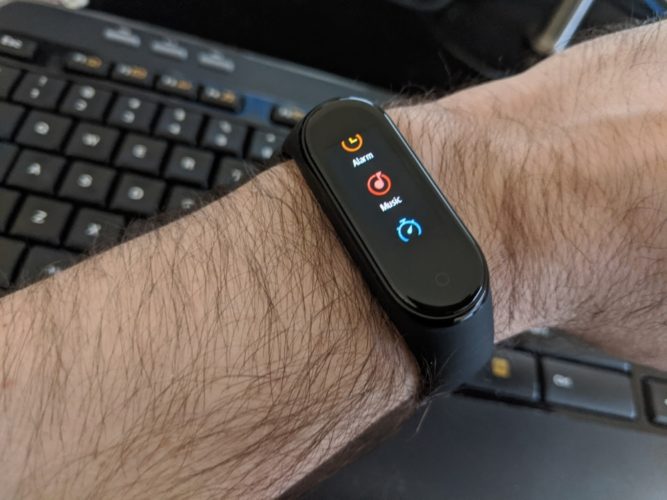 Enter the Mi Band 4. Xiaomi doesn’t offer an official belt clip, but I did find an unofficial one that sells for less than $4. Unfortunately it ships from China and I’m still waiting for mine to arrive.

As luck would have it, the Mi Band 4 also kind of fits in the Fitbit One belt clip… but the fit isn’t as tight as I’d like, so after wearing the Mi Band clipped to my belt for a week or two, (and having it fall out a few times) I decided to move it to my wrist for now. I take it off and put it in a shirt pocket if I’m using my treadmill desk, and it seems to detect steps without too much trouble.

The Mi Fit smartphone app isn’t all that great, but there are third-party alternatives that power users can explore including Notify & Fitness for Mi Band and Tools & Mi Band. You can also sync Mi Fit with Google Fit if you prefer Google’s way of presenting data or just want to see data from multiple devices in one place (if you have a smart scale from a company other than Xiaomi, for example).

And folks who’ve spent times with more fitness trackers than I have subtract some points for the Mi Band 4’s limitations (it doesn’t track as many exercises as some other devices, and sleep tracking may not be that accurate), I’m pretty impressed with just how much this inexpensive device does do. 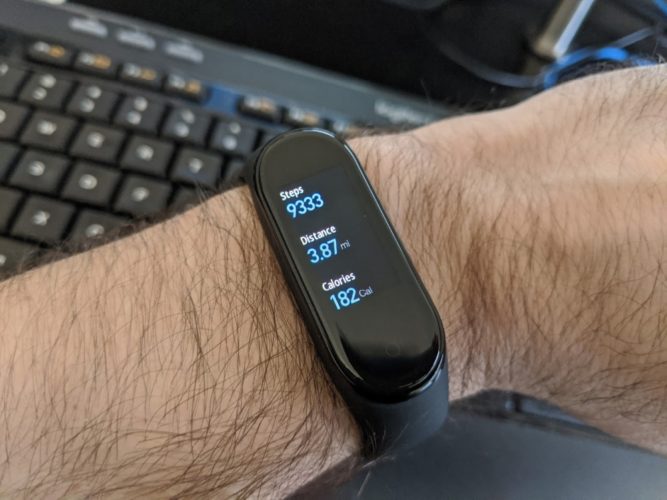 Personally I just bought it because sometimes I need a reminder to get off the couch a little more often on my days off or to actually use my treadmill desk on days when I’m working from home. The smartphone notifications, weather forecasts, heart rate detection, and other features were all bonuses — and after using them for a few weeks, I’m pleasantly surprised at how useful they are.

But most importantly, despite having a 1 inch OLED display and a constant connection to my phone, this thing gets stellar battery life. 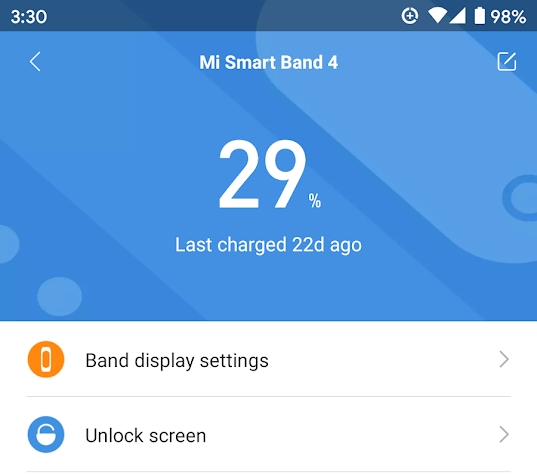 This may not be the best fitness tracker for everyone (and not everyone needs or wants an activity tracker in the first place), but I can’t think of any other gadget in the $30-ish price range that I’ve bought in recent years that I’ve been this happy with.

A few other notes on specs. The Mi Band 4 has a 0.95 inch, 120 x 240 pixel AMOLED display that supports up to 400 nits of brightness. You can also adjust the brightness by setting a night mode to dim the screen automatically after a certain time.

The device has a capacitive touch panel for navigation, and a fingerprint-resistant tempered glass screen.

The Mi Band 4 has a 135 mAh LiPo battery and you can pop the fitness tracker out of its wristband and place it in a charging cradle to fully top off the battery in less than two hours.

While the Mi Band 4 comes with an 18mm silicone wrist strap, it works with third-party wristbands as well, and it does seem that there are at least a few third-party clip holders for folks like me that would rather wear an activity tracker on their belts. I’ll update this article after mine arrives to let you know if it’s worth the $4 asking price (and month-long wait for delivery).

The Mi Band 4 should work with phones running Android 4.4 or later or iOS 9 or later. And activities tracked include running, walking, cycling and swimming — it’s waterproof up to 5 atmospheres.

Update 1/30/2020: My belt clip arrived. The fit is a little less snug than I’d like, but I’m hoping it’s tight enough to keep the Mi Band from falling out while I’m walking. If that doesn’t prove to be the case, I’ll probably just wear the belt clip while using my treadmill or elliptical and stick with the wristband until I find another belt clip that I like better. 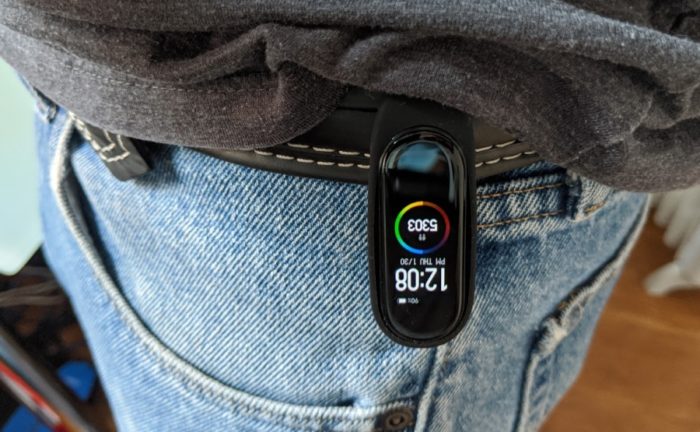