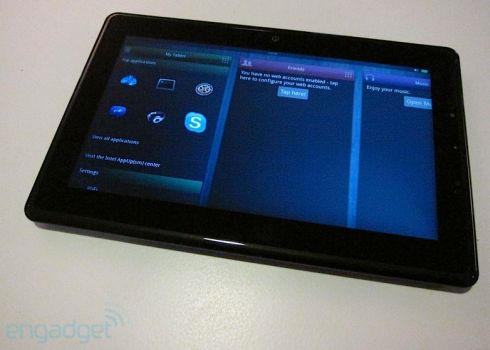 A number of manufacturers have announced plans to offer tablets and notebooks with Intel Atom Oak Trail chips… and while most of them will run Windows 7, the chipset can also handle a number of other operating systems including Google Android and MeeGo Linux. Now the folks at Engadget have spotted one of the first MeeGo tablets with an Oak Trail chip.

The i-Buddie tablet was hanging out at the MeeGo Conference in San Francisco this week. The WiFi drivers arent’ working at the moment, but if you’ve been wondering what MeeGo would look like on a 10 inch tablet, you can get a good idea from Engadget’s hands-on gallery.

Note that the tablet looks substantially thicker than an iPad or most Android tablets. While the Intel Atom Z670 Oak Trail processor uses less power than most Intel processors, it still uses more energy and generates more heat than a typical ARM-based chip. The i-Buddie tablet appears to have vents, and I imagine there might be a tiny fan somewhere inside the case to keep things cool.

The tablet also has a nice range of connectivity options including an SD card slot, HDMI port, headset jack, and USB port.