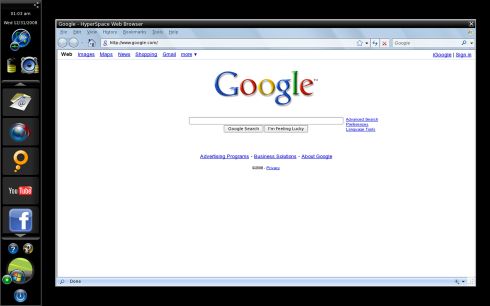 Phoenix Technologies has signed a deal with Asus to include HyperSpace “instant on” software on new Asus laptops. A Phoenix spokesperson tells me that includes at least some Eee PC netbook models.

HyperSpace is basically a stripped down operating system that boots faster than Windows or a full Linux distro, letting you access some apps like a web browser, VoIP, chat utility or media player without waiting for Windows to boot. I got a chance to check out HyperSpace at CES, and saw that it’s not exactly an instant on environment for netbooks. On a Lenovo IdeaPad S10, which has similar hardware to the Eee PC line of computers, it took more than 10 seconds to boot HyperSpace. Still, I suppose that’s faster than the 40+ seconds it typically takes to boot Windows XP.

There are two versions of HyperSpace. The version that can be used with more powerful laptops allows you to boot Windows in the background while HyperSpace loads, which lets you toggle back and forth betwen the two operating systems. The netbook version only lets you boot into one OS at a time.

HyperSpace is also available for anyone to download and install on their own, but Phoenix charges a yearly fee to use the software after your 21 day free trial is up. It’s not clear whether Asus and other companies that preload HyperSpace on computers will charge customers an additional fee for the software. Update: Kevin at jkOnTheRun has confirmed that HyperSpace will ship on Asus notebooks with a normal subscription plan. In other words, you’ll need to pay $40 a year to use the software on an Eee PC after your 21 day free trial expires.