And there are unofficial systems like the Super Retro Champ, which lets you play SNES and Sega Genesis games on a handheld system — by inserting classic game cartridges.

One thing I wasn’t expecting to see? A system that takes handheld games and puts them on the big screen. But that’s the idea behind the RetroN Jr. from HyperKin. 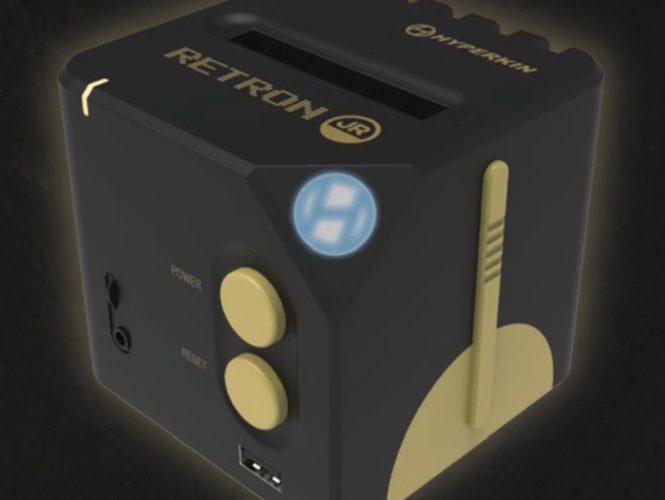 It’s basically a small box with a slot on the top for Game Boy, Game Boy Classic, and Game Boy Advance carts.

You can plug the system into a TV with an HDMI cable, and it upscales games to 720p. If you have an older TV without HDMI support, there are also composite connectors. And the RetroN Jr draws power from a USB-C port.

According to Gizmodo and IGN, HyperKin hasn’t decided whether to include a wired or wireless controller with the system yet. But either way, the RetroN Jr. will come with a controller that looks like a classic SNES gamepad.

There’s also a headphone jack on the front of the system for private listening, as well as a USB port (possibly for the controller). On the back, there’s a Game Boy Link Port connector, but HyperKin is apparently reluctant to say whether the system will support head-to-head multiplayer gaming.

HyperKin hasn’t announced pricing yet, but says the RetroN Jr. will be available for purchase later this year.

If all of this sounds familiar, maybe that’s because the RetroN Jr. started out as an April Fool’s joke when HyperKin released a concept drawing of the device back in 2017. I guess the relatively positive response to the idea was enough for the company to proceed with turning the non-portable Game Boy-compatible retro console into a real thing.