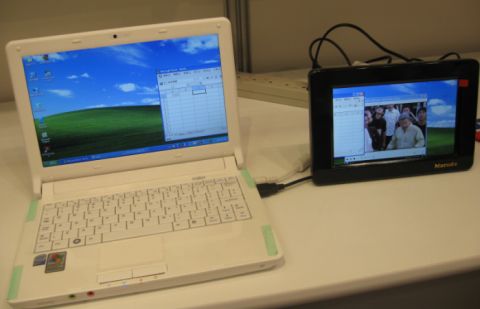 I took a little trip to the “International Gateway” section of CES today where a bunch of Chinese, Taiwanese, and Hong Kong-based ODMs and OEMs are showcasing products. For the most part you’ll never see products in the US or Europe with these company’s names on them, but they’re seeking western distributors for their technology.

I’ll have a few more posts featuring some of these companies in the next few days, but one of the niftiest products I saw was from a company called HWG Technology. The company is selling a rather average looking netbook with a 1.6GHz Intel Atom CPU, an 8.9 or 10.2 inch display, 1GB of RAM, and a 120GB or 160GB hard drive for around $400. But much cooler than the laptop was that secondary display plugged into it.

The 7 inch, 800 x 480 pixel Maruda display is powered by USB and allows you to drag items from your main screen or span windows across both screens. For instance, you could play a video in the Maruda display while browsing the web on the main netbook screen. And you can plug up as many of these secondary displays in as you’d like. HWG’s netbook has 3 USB ports, so in theory, you could plug in 3 extra displays, although I imagine that would take its toll on your battery life pretty quickly.

I’ll admit it, carrying around a second display sort of makes an ultraportable laptop a bit less portable. But if you use your netbook as your primary machine around the house and need a bit of extra screen real estate this product could come in handy. The Maruda display will likely retail for around $100. HWG also plans to bring a touchscreen version to market, which will cost a bit more.