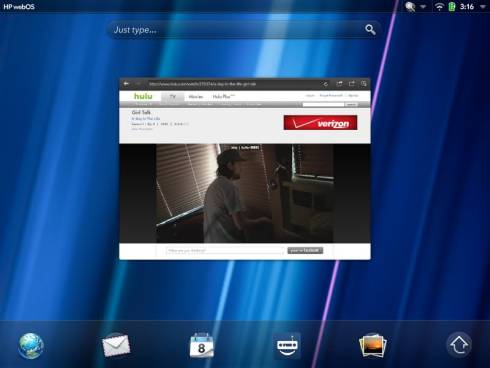 The folks at online video site Hulu engage in a funny dance with gadget owners. As soon as a new Adobe Flash-capable product that’s not a Windows, Mac, or Linux computer comes out, one of the first things people in the US try to do is see if Hulu works. It usually does… for a while. Then Hulu realizes that a lot of people are accessing its video streams from a new phone, tablet, or internet-connected set top box and it makes a change to kill access.

Then someone goes and releases a patch that allows Hulu to work again… until it doesn’t.

Right now the HP TouchPad is in phase two. Hulu recently noticed that there were actually people using the HP TouchPad tablet all of a sudden, and it hit the kill switch. So a homebrew app developer by the moniker of PuffTheMagic released an app called Hulu Fix that lets you watch Hulu streams in the webOS browser again.

You’ll need to install PreWare on your tablet in order to use the Hulu Fix. The easiest way to do that is to follow the Quick Install instructions at webOS-Internals. Once that’s done, just search the Preware market on your tablet for “Hulu Fix” and you should be good to go — at least until the next time Hulu makes a change that disables access again.

Update 9/16/11: Hulu must have issued an update, because the patch no longer works.

8 replies on “Hulu returns to the HP TouchPad (unofficially)”