Huawei’s expected to launch the Mate 20 smartphone on October 16th. It’ll be powered by the company’s new Kirin 980 processor, and it may have at least three cameras, arranged in a square-shaped pattern for some reason.

But one of the most surprising things about the phone? Not only will you probably be able to charge the Mate 20 wirelessly… you may be able to use the phone itself as a wireless charger. 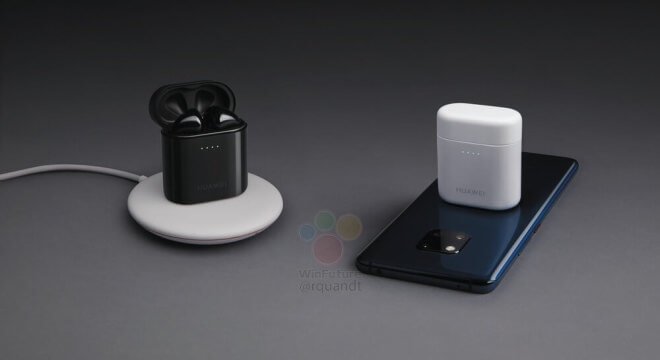 Here’s the idea: put the earbuds in their charging case, and then put the case on the back of the phone and the earbuds will draw power from your phone’s battery.

Of course, that’s not the only way to charge the earbuds. You can also place them on a Qi-enabled wireless charging pad or plug in a USB Type-C cable. But if your earbuds die while you’re on the go, it’s nice to have the option of giving them a little extra life just by placing them on your phone… assuming your phone has battery capacity to spare.

Honestly, I’m not sure how often I would use a feature like this, but it’s nice to have. It sort of gives me the same feeling I had when I first discovered that you could connect two phones with a USB Type-C cable and use one phone to charge the other. I’ve never done it since, but it still felt like magic the first time I saw it work.

The Freebuds 2 Pro are expected to run for up to three hours on a charge or offer up to 15 hours of standby time, and there’s a battery in the case that should let you recharge the earbuds a few times before the case needs to charge.

According to Winfuture, the earbuds use bone conduction to detect your voice and distinguish it from other speakers, which could help when using voice commands. And the Bluetooth earbuds support high resolution audio with bitrates up to 560 Kbps.

We should find out more about the Freebuds 2 Pro when the Huawei Mate 20 is unveiled in October.