Huawei’s latest smart glasses have speakers built into the temples, allowing you to listen to music, hear audio notifications, or make phone calls when the eyewear is synced to your smartphone via Bluetooth.

They’re also Huawei’s first smart glasses to run the company’s HarmonyOS software, which the company develops not only as an alternative to Android, but also as a platform for IoT devices ranging from smart TVs to wearables. But possibly the most interesting thing about Huawei’s new glasses? The frames are interchangeable. 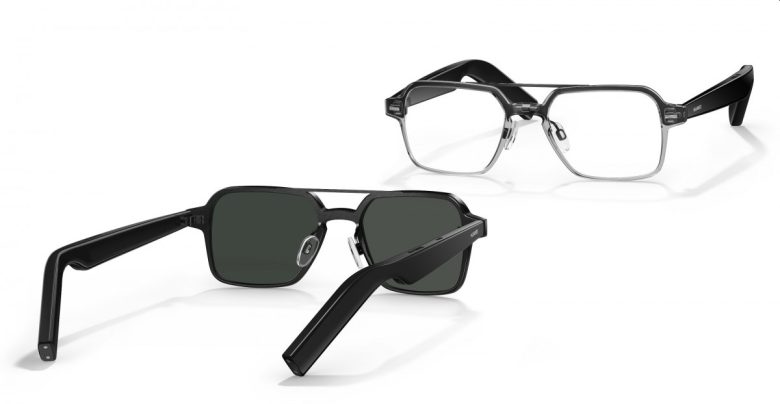 The electronics are built into the temples themselves, allowing you to pop off the frames if you want to change lenses or frame styles. Want to wear a set of clear or blue light-blocking glasses while you’re at work and sunglasses on the way home? Rather than buying two sets of smart glasses, you can buy two frames and swap one out for the other when you leave the office.

Huawei plans to offer a range of different styles including classic rectangle, vintage round, and aviator-style frames made from different materials, with prices starting at 1,699 CNY ($267) for normal glasses or 1,899 CNY ($298) for sunglasses.

The glasses have open speakers built into the temples, which means that folks standing nearby might be able to hear music or other audio if they’re standing close by, but the company says the glasses can lower the sound level automatically when you want messages to be for your years only.

There’s a touch sensor in the temples, allowing you to control some apps and functions by pinching or tapping. And there’s a mic with directional audio support that you can use for phone calls or voice controls.

Huawei also built a posture sensor into the eyewear, with the option to give you a verbal notification if you’ve been looking downward for an extended period to avoid neck or back pain.

The company says you should be able to get 4.5 hours of battery life during phone calls, 6 hours while listening to audio, or 16 hours of standby time and the smart glasses work with a magnetic charger when it’s time to recharge the battery.

Huawei’s new glasses are available in China starting today, but there’s no word on if or when you’ll be able to buy them in other countries.