Over the past few years, Huawei has risen to become one of the world’s top smartphone makers in terms of market share. But the Chinese electronics company faces something of an existential threat due to US trade restrictions which block hardware and software companies from working with Huawei.

So the company is reducing its reliance on outside partners. Among other things, that means developing an alternative to Google’s Android operating system.

So far Harmony OS works with a handful of recent Huawei devices including the Huawei P40 and Mate 30 series smartphones and the Huawei MatePad Pro tablet. Those are all devices that initially shipped with Android, but users can sign up to receive an over-the-air update that will replace Google’s operating system with Huawei’s.

Once the update is installed… your device might not look all that different. Huawei has been using a custom Android interface called EMUI for years, so the company used the same look and feel when designing Harmony OS for phones.

Another thing that’s the same? Harmony OS supports Android apps, which means users will be able to install many of the mobile apps they’re already used to using. You just won’t be able to download them from the Google Play Store – Huawei hasn’t been able to install the Play Store or other closed-source Google apps including Chrome, YouTube, and Google Maps on recent phones that did ship with Android. Loading the Google Play on non-Android phones seems like a non-starter.

Instead, you can install third-party apps Android downloaded from Huawei’s own app store or other locations. And Huawei is encouraging developers to port their apps to run natively on Harmony OS with a developer competition with hundreds of thousands of dollars worth of rewards. 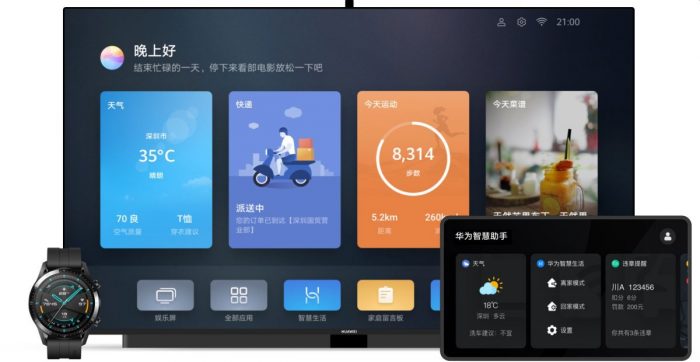 While the big news is support for phones, Huawei is positioning Harmony OS as software that can power everything from phones and tablets to in-car systems, wearables, televisions, smart appliances, and other gadgets. So a big part of the operating system is its ability to run the same apps in different views for devices with different screen sizes, shapes, and use case scenarios, as demonstrated in this short animation: