Two companies have officially revealed smartphones with foldable AMOLED displays. Come Sunday, that number will be be three.

We already had a pretty good idea that Huawei was going to introduce a foldable phone at Mobile World Congress this weekend. But someone snapped a shot of a sign being installed at MWC and Posted it to twitter, giving us our first look at the phone… and its name. 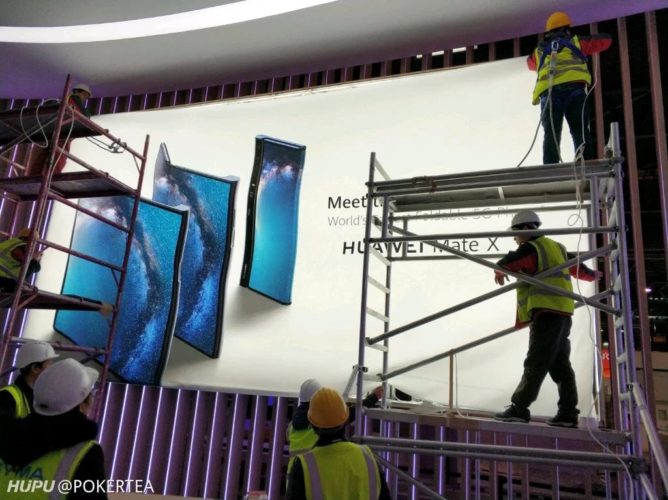 Samsung’s Galaxy Fold bends inward so that the 7.3 inch display is hidden when the device is folded. For that reason, Samsung put a smaller 4.6 inch screen on the outside of the device so you could use it in one hand in phone mode.

Huawei’s Mate X, meanwhile, seems to fold outward so that the screen wraps around the front and back of the device when it’s in phone mode. This lets you use a little less than half of the full tablet screen in phone mode.

This isn’t the first device we’ve seen that folds in this way — the Royole FlexPai also folds outward. But Royole’s phone also has a rather wonky looking design and a very visible crease in the middle of the screen when it’s unfolded for use in tablet mode.

It remains to be seen whether the Mate X will avoid that fate.

There’s still no word on the phone’s specs, pricing or availability. But we should find out more when Huawei officially launches the Mate X on Sunday.