Shortly after the US government got into a fight with Chinese electronics giant Huawei, rumors started floating that the company would stop using Google’s Android software on its phones and switch to its own operating system.

That’s not likely to happen anytime soon… but Huawei has been developing its own operating system for the past few years. And now the company is ready to unveil it to the world.

At the Huawei Developer Conference this week, Huawei officially unveiled Harmony OS, an open source operating system that could be used on a wide range of devices including smartphones, tablets, PCs, wearables, TVs, and cars, just to name a few. 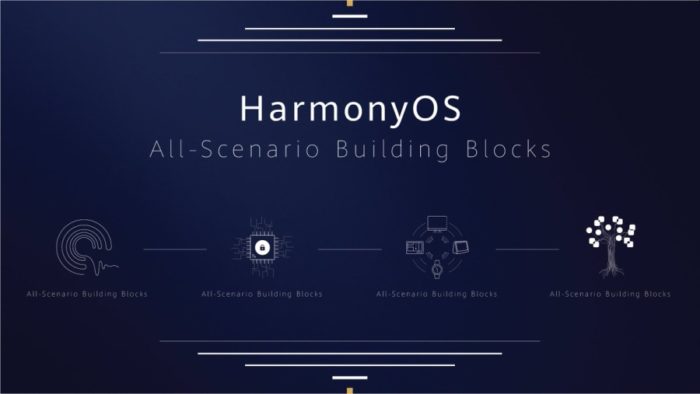 For now, the company’s first device to ship with Harmony OS will be the Honor Vision smart TV. Huawei has no plans to release a phone with the operating system… but if Huawei is cut off from using Android for technical, business, or political reasons, it looks like the company could switch to using Harmony OS without much difficulty.

It makes sense for the company not to play up that idea now. Huawei says Harmony OS offers a number of advantages over Android and other operating systems thanks to a modern, streamlined, and secure codebase. But that’s beside the point — Android is the most popular operating system in the world right now, and it’d be tough to sell phones that can’t run Android apps or don’t work the way users expect them to.

Remember when Samsung tried selling phones powered by its own Tizen-based operating system? That hasn’t gone over so well, with the company only offering a handful of models in a few markets… and Samsung is the world’s top phone maker at this point. If Samsung doesn’t have the clout to convince people to buy phones with a non-Android operating system, how will Huawei?

But Samsung continues to use Tizen for its smart TVs, smartwatches, and other IoT devices… a strategy that looks a lot like Huawei’s plans for Harmony OS.

And if either company were ever put in a position where Android wasn’t an option anymore, then that’s when it might make sense to switch their phones to an operating system designed in-house as a Hail Mary pass before deciding whether to just give up on the smartphone space altogether.

All of which is to say that Harmony OS isn’t really an Android alternative right now… but only because Huawei doesn’t plan to stop using Android.

But it is a powerful, versatile operating system that could be an Android alternative one day if it needs to be.

A modularized #HarmonyOS can be nested to adapt flexibly to any device to create a seamless cross-device experience. Developed via the distributed capability kit, it builds the foundation of a shared developer ecosystem #HDC2019 pic.twitter.com/2TD9cgtdG8

The operating system is based on a microkernel (much like Google’s Fuschia), which the company says offers multiple benefits including tighter security and the ability to run across a range of devices — Huawei says its tools will allow developers to create a single app that can be deployed across phones, TVs, automotive systems, or other devices.

The first version of Harmony OS still includes a Linux kernel and Huawei’s LiteOS kernel, but Huawei says when it releases Harmony OS 2.0 next year, it will only feature the microkernel.

via Engadget, xda-developers, and Android Police

10 replies on “Huawei unveils Harmony OS for smart TVs, watches, and pretty much everything but phones (for now)”