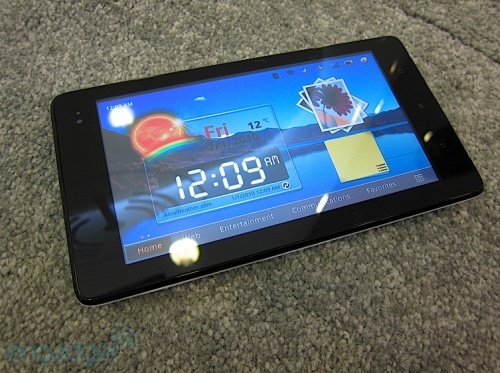 The S7 Slim is a little thinner than the original Huawei S7 tablet and it loses the optical finger navigation area from the side of the display. It also replaces the 800 x 480 pixel resistive touchscreen display with a capacitive touchscreen. Unfortunately the screen resolution is still stuck at 800 x 480 pixels.

The tablet runs Google Android 2.2 and has a Qualcomm Snapdragon processor. It has USB and HDMI ports, a microSD card slot, and a rear-facing camera. The S7 Slim supports 3G, WiFi, Bluetooth, and GPS connectivity. According to CarryPad, the Huawei S7 Slim is expected to retail for under $300 when it ships in April.

We don’t know as much about the Huawei S7 Pro at the moment, but it appears to have a thin aluminum case, HDMI and USb ports, and both front and rear-facing cameras. At about 2 minutes, 30 seconds into jkkmobile’s video you can also see the product card from Mobile World congress, which I believe shows that the tablet has a 1.2 GHz dual core CPU, runs Google Android 2.3 Gingerbread, and can support 1080p HD video playback.

You can check out the video after the break. You can also find more hands-on photos of the S7 Slim at Engadget.