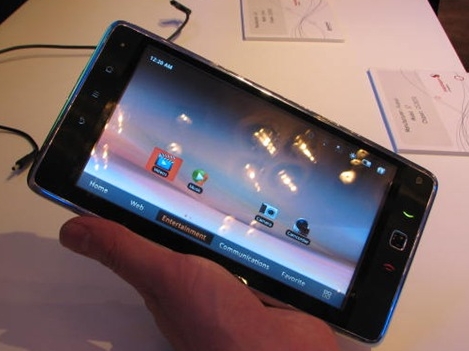 OK, you could probably make the case that the Dell Streak 5 inch device isn’t so much a tablet as a kind of chunky smartphone. After all, it runs Google Android, surfs the web over a a 3G connection, and lets you make phone calls if you’re willing to hold it up to your ear — or wear a headset. But I have a hard time imagining anybody holding a Huawei S7 Android tablet up to their face to make a call — even though this 7 inch tablet packs all the same features and then some.

Chippy at Carrypad got a chance to check out the Huawei S7 at Computex, and he came away mighty impressed. While the company isn’t spilling the beans on all the details, here’s what we know so far. It has a 7 inch, 800 x 480 pixel capacitive touchscreen display. It runs Google Android 2.1. And in addition to 3G and voice connectivity, the tablet ships with Google applications including Gmail, Google Calendar, and best of all, access to the Android Market, which means tens of thousands of third party apps are just a few clicks away.

There’s no word on pricing or availability yet, but Chippy predicts it won’t come cheap. The Dell Streak is selling for $500 without a contract, and Dell is a much bigger name with more distribution channels than Huawei.