The Huawei MediaPad 10 FHD is a tablet with a 10.1 inch, 1920 x 1200 pixel display, a Huawei quad-core processor, and an 8MP rear-camera. It runs Google Android 4.0, supports 4G LTE mobile broadband, and looks like a pretty nifty tablet in most respects. But you can’t buy one yet.

Huawei first introduced the tablet in February, and recently announced it will go on sale in China by the end of August. There’s still no word on international launch details, but Huawei has been pushing its phones and tablets in the US, so I wouldn’t be surprised to see the MediaPad 10 FHD show up on western shores one of these days. 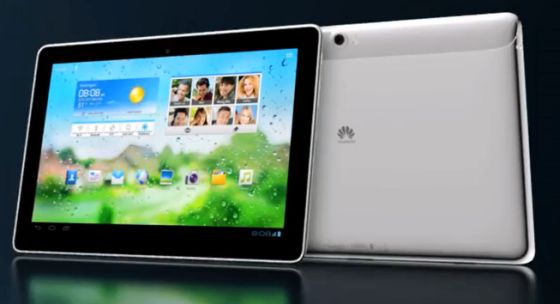 Android Central spotted an official video showing off the MediaPad 10 FHD on Huawei’s YouTube channel. So now we know the tablet has an IPS display, an 8MP camera with auto-focus and dual LED flash, and Dolby surround audio.

The tablet features Huawei’s own quad-core processor with 16 graphics processor cores. It sounds a lot like an NVIDIA Tegra 3 chip, but it’s the Huawei K3V2 processor the company unveiled earlier this year.

Huawei will also offer an optional Laptop Kit which lets you connect the MediaPad 10 FHD to a keyboard dock for use as a notebook.