Huawei’s new MatePad Pro is a premium Android tablet with a 10.8 inch AMOLED display, the kind of specs you’d find in a high-end Android smartphone, and support for optional accessories including a detachable keyboard cover and a pressure-sensitive pen that magnetically clings to the side of the tablet when you’re not using it.

In other words, the MatePad Pro is Huawei’s answer to Apple’s iPad Pro (or maybe Microsoft’s Surface line of tablets). But it does have one option that the competition lacks for now — Huawei will offer WiFi-only and 5G versions of the MatePad Pro. 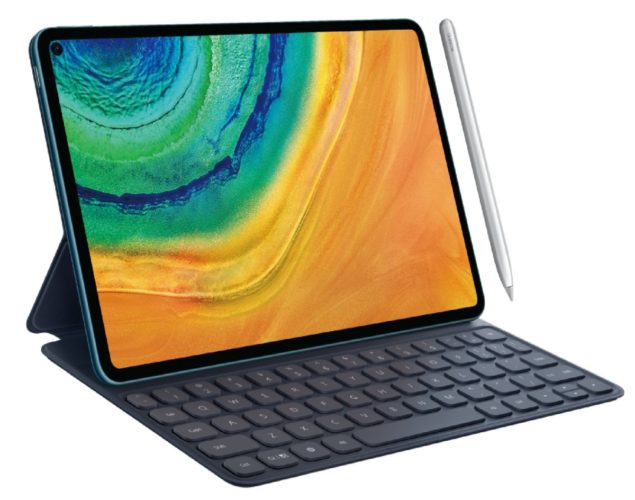 There’s not a lot of competition in the premium Android tablet space. Samsung’s Galaxy Tab S series comes to mind and… that’s about it. Most other companies that are still making Android tablets have focused on the low-end space in recent years.

But folks who see Android as a viable tablet/laptop-replacement platform, will probably find a lot to like about Huawei’s new tablet.

It’s powered by a Kirin 990 processor, has a 2560 x 1600 pixel display, and 40W fast wired charging, 27 watt fast wireless charging support, and reverse-wireless charging, allowing you to charge a phone or a set of wireless earbuds by placing it atop the tablet.

The MatePad Pro has four speakers, a USB-C port (but no headphone jack), and the aforementioned accessories that let you use the tablet for writing, drawing, or typing.

The Huawei MatePad Pro will be available in June in China, Europe, and select other markets — although there’s no word on US availability.

The pen and keyboard are sold separately, so you’ll likely end up spending a lot more if you want a fully decked-out model.

One thing to keep in mind is that this tablet will be shipping without support for the Google Play Store or Google apps and services such as Gmail, Google Maps, or YouTube. You can blame Huawei’s rocky relationship with the US government for that omission. But Huawei has been working to develop its own alternatives to Google’s ecosystem, which means that Huawei’s Android phones and tablets do have an app store and shared APIs for app developers. But apps and media already purchased from Google Play won’t be available unless you sideload Google Play Services.

via @HuaweiMobile, The Verge, and Anandtech

8 replies on “Huawei MatePad Pro is a high-end Android tablet with pen, keyboard, and optional 5G”