Huawei’s MateBook X Pro is a thin and light laptop with a high-res touchscreen display, slim bezels, and an… unusual camera design. The webcam’s not above the display, where you’ll find it on most notebooks. And it’s not below the screen, as it is on Dell’s XPS 13 lineup. Instead, it’s tucked into the keyboard, between the F6 and F7 keys.

When you want to use the camera, just push the key and it will pop up. You can push it back down when you’re not using it.

This setup provides two benefits: it saves privacy-oriented folks from slapping a piece of tape over their webcam, and it allowed Huawei to create thin top and bottom screen bezels.

First unveiled at Mobile World Congress in February, the Huawei MateBook X Pro is launching in the United States today. Prices start at $1199, but honestly the $1499 model is probably a better deal if you can afford it.

Huawei is also offering a promotion that may help: order by June 10th and you’ll get a $300 gift card. 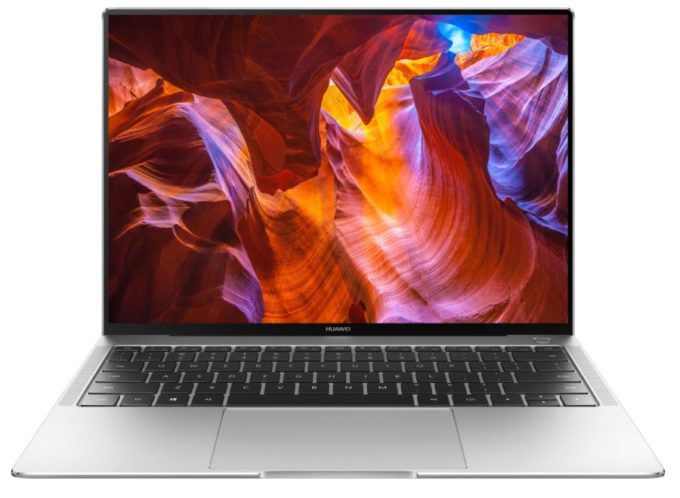 The laptop goes on sale today at Amazon, Newegg and the Microsoft Store. Huawei says each store will offer the $300 gift card promotion, although the deal doesn’t seem to be live everywhere yet.

Anyway, the promotion sort of brings the prices down to $899 and $1199… assuming you plan to buy some more stuff anyway.

Here are the two configurations Huawei will be offering in the US:

Both models have a 13.9 inch, 3000 x 2000 pixel touchscreen display, USB Type-C and Type-A ports, and 57.4 Whr batteries (Huawei acknowledges you’ll probably get slightly better battery life if you opt for the model without NVIDIA graphics, but the higher-priced model is better in just about every other way).

The laptop has a spill-proof, backlit chiclet-style keyboard, a fingerprint sensor built into the power button, quad speakers, and an aluminum chassis. The MateBook X Pro weighs less 2.9 pounds and measures about 0.57 inches thick, making it one of the thinnest laptops to feature discrete graphics.

While the price tag definitely puts the MateBook X Pro into premium laptop territory, Huawei rightfully points out that the $1499 model is several hundred dollars cheaper than most similarly-specced models from competitors. And no other company has managed to release a laptop that looks quite like the Matebook X Pro, thanks to its unusual camera placement and nearly borderless display (Huawei says the laptop has a 91 percent screen-to-body ratio).

Huawei is sending me a demo unit to review, so I should have more impressions to share soon. But if you’re not waiting for my opinion, the MateBook X Pro is available for order starting today.