Huawei’s new P20 Plus smartphone with a triple camera system is a pretty impressive looking device, but it packs the same Kirin 970 processor as last year’s Mate 10 and Mate 10 Pro smartphones.

So what’s next for Huawei? Apparently a Mate 20 smartphone with a next-gen Kirin 980 processor. 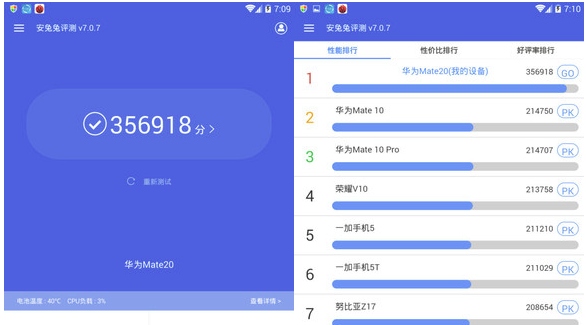 As the folks at Chinese website cnmo noticed, results for an unannounced Mate 20 showed up recently in the Antutu benchmark database.

If you’re curious, the phone scored nearly 357,000 points in the benchmark, blowing away the next-closest Android phones (which happen to be the Mate 10 and Mate 20). But it’s probably best to take these sorts of benchmarks with a grain of salt, since they’re not always indicative of real-world performance.

Huawei develops the Kirin line of processors in-house, and rumor has it that the new Kirin 980 chip will be manufactured using TSMC’s 7nm technology and feature ARM Cortex-A75 CPU cores, Bluetooth 5.0, and an updated version of Huawei’s NPU, or neural processing unit (for artificial intelligence tasks such as auto-scene recognition in the camera app).