Huawei plans to launch its latest flagship phone on October 16th, but Evan Blass has spilled a few beans by sharing a picture of the upcoming Huawei Mate 10 a few weeks early.

The new phone looks nearly identical to last year’s Mate 9, but Blass says there’s also a Mate 10 Pro in the works, and that it’ll probably have slimmer bezels.

But the biggest changes will likely be under the hood. 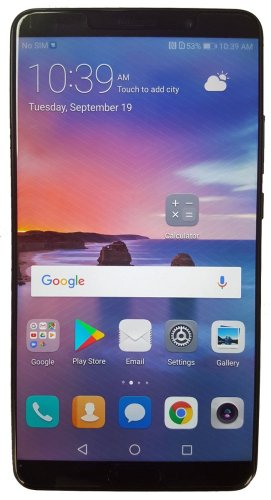 The Kirin 970 processor also includes a new Neural Processing Unit, or NPU, that Huawei says can identify 2000 images per minute. Why would it need do that? Just ask Apple.

One of the key new features in Apple’s iPhone X is a new “Face ID” system that uses a system of cameras and sensors to scan your face, and on-device algorithms to recognize it in an instant, even if you’re wearing glasses, a hat, a new hairstyle, or if you’re in a dark room.

It’s not clear if Huawei’s NPU is designed for exactly the same purpose… the company has posted an odd video to Facebook with a caption saying “Let’s face it, facial recognition isn’t for everyone,” but I can’t really tell if Huawei is saying that Apple’s system isn’t as good as Huawei’s… or if Huawei plans to use its NPU for some other form of secure identification.

We should know more in a few weeks when Huwei officially launches the Mate 10 and Mate 10 Pro… or sooner than that if Evan Blass and other leakers have anything to say about it.