The Huawei MatePad Pro is an Android tablet with a 10.8 inch IPS LCD display, a Kirin 990 processor, and support for up to 8GB of RAM and 512GB of storage. With optional 4G LTE support as well as optional accessories including a keyboard cover and pressure-sensitive pen, this is basically Huawei’s version of Apple’s iPad Pro, Microsoft’s Surface, or Samsung’s Galaxy Tab S series tablets.

But it has a few features most of the competition lacks — such as support for both wireless charging and reverse wireless charging… and, as expected, it also has a punch hole design that features a hole in the display for the front-facing camera.

Huawei unveiled the tablet in China today, and it’s expected to go on sale in that country on December 12th with prices starting at about $470 for a WiFi-only model with 6GB of RAM and 128GB of storage. 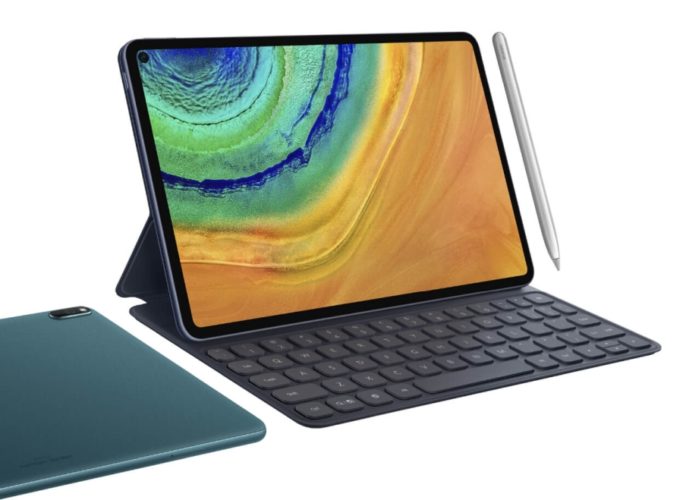 There are a few features you might be expecting from a premium tablet that you won’t find here. The MatePad Pro isn’t waterproof and it doesn’t support NFC. Oh, and it doesn’t come with Google Play, so there’s that.

But with a starting price of less than $500 (in China, at least), it does seem like a competitive option — for folks that don’t need access to Google apps and services out of the box.

There’s no word on if or when Huawei will bring the MatePad Pro to other global markets. But it’s probably worth noting that no Android phones or tablets sold in China ship with Google Play, so the fact that this tablet doesn’t feature them isn’t a problem in Huawei’s home country. Elsewhere, it might be.

via GizmoChina and Engadget