Huawei’s latest laptop is a thin and light model with a 13.3 inch display featuring a 3:2 aspect ratio, an Intel Whiskey Lake-U processor, an integrated fingerprint sensor, and NFC support.

The company unveiled the Huawei MateBook 13 at an event in China. Oh, and unlike the MateBook X Pro, it has a camera above the screen. 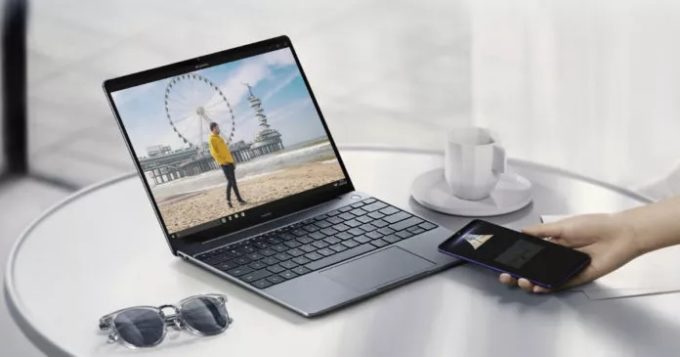 The laptop measures about 0.6 inches thick and weigh about 2.8 pounds and it will be available in gray, silver, and rose gold color options.

Huawei is positioning the MateBook 13 as computer that’s about the same size as the new Apple MacBook Air, while featuring more processing power. It will be available with at least two different CPU/GPU options:

The notebook features 8GB of LPDDR3-2133 RAM and a 256GB SSD and Huawei promises up to 10 hours of battery life during video playback thanks to the computer’s 42 Wh battery.

Ports include a headphone jack and USB Type-C ports on the rigth and left sides of the laptop.

There’s also a fingerprint sensor built into the power button, and the system features an NFC module and support for Huawei Share 3.0 software which allows you to quickly share files between a PC and a Huawei smartphone at speeds up to 30MB/s.

Huawei says the MateBook 13 will ship in December. There’s no word on how much it will cost or which markets will see it first.

via 91mobiles, MySmartPrice and MobileScout