Huawei has been selling a somewhat popular line of mid-range phones under its Honor sub-brand for the past few years. And while they tend to offer decent specs at a decent price, there’s been another selling point for some folks: Honor has offered an official method for unlocking the bootloader and partnered with xda-developers to encourage development of custom ROMs among other things.

Now it looks like that’s coming to an end.

The website for requesting bootloader unlock codes has been down for the past few weeks, and now it’s back… but there’s also a notice letting users know that the program will be ending in 60 days. 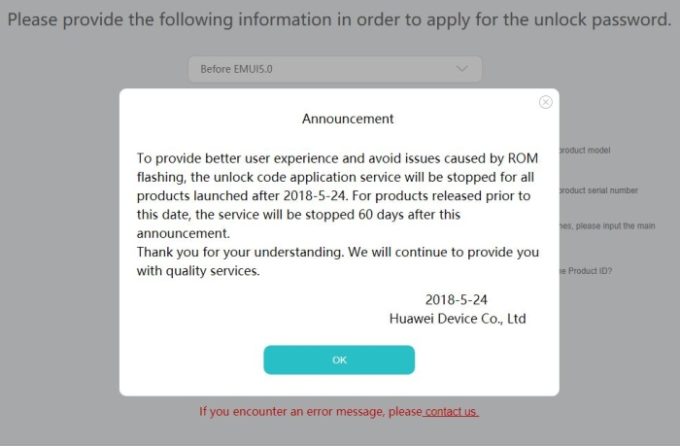 Taking the message at face value, it sounds like Huawei is tired of troubleshooting problems that occur when users unlock the bootloader and flash custom ROMs or other officially unsupported software.

Of course, Huawei could just put a big “proceed with caution” warning on the website, but that wouldn’t necessarily stop determined users who may or may not have the skills necessary to troubleshoot any problems that arise on their own.

What about letting you know that you’re voiding your warranty by unlocking the bootloader? Yeah, it looks like that might be a violation of US law. So maybe it’s not surprising to see Huawei make this move.

While it’s likely that most owners of Huawei and Honor phones have no intention of unlocking the bootloader, those who do still have two months to make use of the program. After that you’ll probably have to rely on unofficial third-party tools to unlock your device. I suspect that could slow down development of custom firmware in the future if the number of unlocked Huawei devices declines.

3 replies on “Huawei is killing its bootloader unlocking service”