A year after introducing its first foldable smartphone (which didn’t actually start shipping until a few months ago), Huawei is back with the Huawei Mate Xs.

The new folding phone… looks an awful lot like the old one. But it has some key updates. The Kirin 980 processor from the original Mate X has been replaced with a Kirin 990 5G chip. 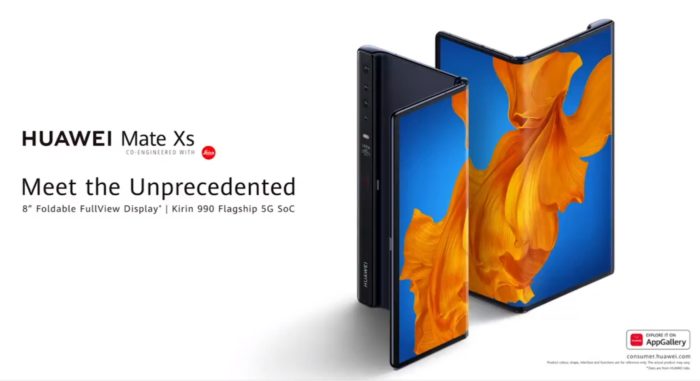 There are no front-facing cameras. So you’ll either need to flip the phone around to shoot a self-portrait or make a video call. But the good news is that means you get the same high-quality camera selection no matter how you’re holdinf the phone.

Other features include a 4,500 mAh battery, support for 55W fast-charging, and a 5G modem — all of which last year’s model also had. But this time it’s baked into the Kirrin 990 5G SoC, so there’s no need for a separate modem chip.

The new foldable phone also has an updated hinge which should allow the device to fold flatter in tablet mode, decreasing the prominence of a visible crease.

Like all recent Huawei smartphones, this one will ship without the Google Play Store, but will instead have Huawei’s own version of an app store.