But Huawei is also introducing a Kirin 990 5G variant. Not only is it the company’s first mobile processor with integrated 5G support (rather than a separate-chip solution), but it also supports higher CPU speeds and features better dedicated hardware for AI processing. 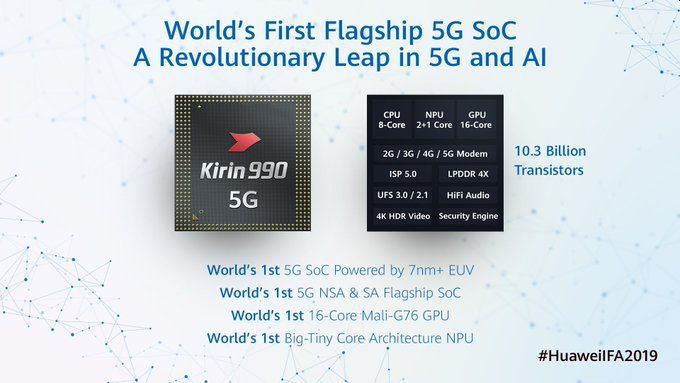 Of course, 5G is still rolling out globally and it’s not universally available yet, carriers tend to charge a premium for accessing networks using the new high-speed, low-latency standard, and smartphones with 5G support tend to be pricier than their 4G-only peers.

So it makes sense that Huawei would offer a non-5G variant of its new processor. While I’m not entirely sure why the company felt the need to make it slightly less powerful than the 5G version, I suspect there won’t be a huge impact on real-world performance.

Here’s a run-down of some key specs for each chip, with the differences highlighted:

Huawei is holding an event later this month where the company is expected to unveil the new Huawei Mate 30 and Mate 30 Pro. It’s likely that the smartphones will be powered by these new Kirin 990-series processor, as will other upcoming phones from Huawei and Honor.