Huawei has been designing its own chips for smartphone processors for a few years, and they’re generally pretty competitive with the latest chips from rivals including Qualcomm and Samsung. But in some ways it looks like the new Kirin 980 processor is ahead of the pack… at least on paper. We’ll have to wait a little while to see real-world results.

The company unveiled the Kirin 980 during a press event today, and it seems to hit a lot of firsts. 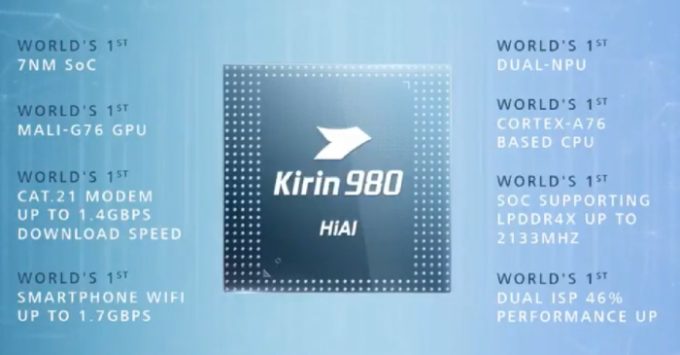 Huawei says the move to 7nm should bring up to a 20 percent performance boost and up to 40 percent improvement in power efficiency. The Kirin 980 probably won’t be the only chip to benefit from the move to 7nm for long though. Qualcomm and other chip makers plan to launch 7nm chips in the not-too-distant future as well.

The Kirin 980 also uses the latest ARM designs for improved performance and efficiency, plus a few Huawei-specific technologies like that new dual NPU, which Huawei says is up to 120 percent faster than the single NPU in the Kirin 970 processor. It can recognize up to 4,500 images per minute, which could come in handy for automatic scene detection and other camera and computer vision applications.

The new Cat 21 modem means that phones with the new chip will support theoretical download speeds up to 1.4 Gbps. Of course you’re unlikely to get that in the real world anytime soon — most networks won’t offer speeds anywhere close to that and if they did you’d probably burn through your data cap in less than a minute.

Some of the first phones to sport the upcoming Kirin 980 processor will include the Huawei Magic 2 and the Huawei Mate 20 (which is launching on October 16th).

via AnandTech, xda-developers, and GSM Arena