Google is banning apps which place ads in the Android notification bar from the Google Play Store. That’s just one of the changes in the latest Google Play Developer Program policy update — but it’s one that could pretty much put at least one company out of business.

Airpush is an ad network which specializes in giving app developers tools to show ads in the Android notification area. 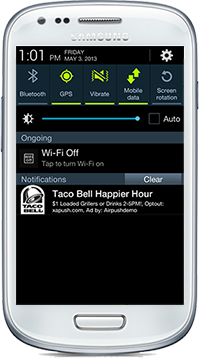 The  move makes sense, since ads that show up when you’re not actually viewing an app can be confusing and annoying. It’s a little surprising it’s taken Google this long to enact the policy change. What remains to be seen is how long it’ll take for apps that already use Airpush-style ads to clean up their act. Theoretically existing apps have until September 23rd to comply, but it could take a while for Google to identify and remove any stragglers.

Apps can continue to show some types of ads via notifications, if they’re a key part of the service offered by the app. For instance, if you install a game or another app that includes in-app purchases and there’s a sale going on, a notification could be used to alert you to the promotion.

Google is also prohibiting apps which create homescreen shortcuts, browser bookmarks, or other links on your system for advertising purposes.

The new rules apply to Android apps which are distributed via the Google Play Store. There’s nothing stopping developers from continuing to make apps which place ads in the notification tray or on your home screen — but they’ll have to distribute them via other methods. Since the Google Play Store is by far the largest and most popular marketplace for Android apps, I suspect most developers will want their software to be available through that channel.