Just a day after MSI started selling the first VR-ready gaming PC in a backpack, HTC has unveiled a device that could make the whole idea of a gaming backpack unnecessary.

Here’s the thing: high-end virtual reality headsets like the HTC Vive and Oculus Rift currently need to have a wired connection to a PC to work properly. But if you’re moving around while wearing a headset that covers your eyes, you might worry about tripping over wires running from the headset to your computer. So a bunch of companies have unveiled an odd solution: wear the PC on your back so the wires just go from your head to your back and never hit the floor.

But HTC and a startup called TPcast have another solution: a wireless adapter fro the HTC Vive. It goes up for pre-order in China today for about $220 and should begin shipping to customers in early 2017. 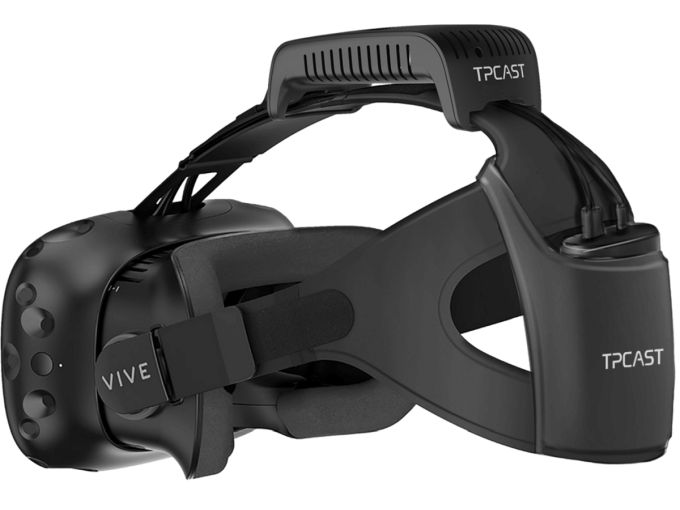 TPCast is a company that’s participated in HTC’s Vive X Accelerator program, and the wireless adapter is being sold through the official Vive Chinese website, although only limited quantities are expected to be available initially, and “order fulfillment will be priortiized to existing customers who can provide a valid Vive serial number.”

According to UploadVR, the developers of the wireless adapter say that there’s no noticeable difference in latency between a wired and wireless connection.

At launch, the adapter comes with a battery that should provide up to 90 minutes of run time, but the company plans to offer an extended battery in the future that can last longer… although you’ll need to place it in your pocket since it’ll likely be too large to comfortably wear on the headset.

Of course, there’s a cheaper way to get a wireless VR experience: use a phone-based system like Google Daydream or Samsung Gear VR. But you won’t currently get the same kind of performance (or the same level of games and other experiences) from those more affordable platforms.