HTC’s newest flagship phone doesn’t look a lot like the company’s top tier phones from recent years. So maybe that’s why it has a new name.

The HTC U Ultra is a 5.7 inch phone with a glass back, a secondary ticker-style display above the screen, a USB 3.1 Type-C port, and no headphone jack.

It’s expected to be launch soon for about $749… which could be a tough sell at a time when you can get a top notch phone for about half the price. But HTC is including a few features that it hopes sets its device apart. 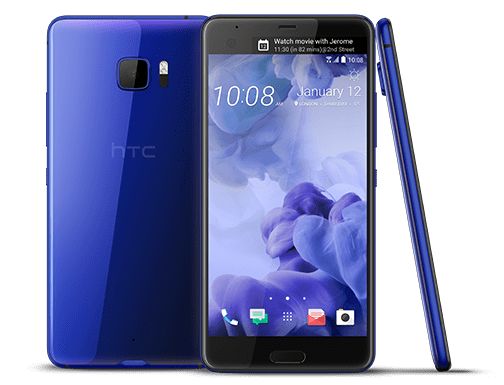 As The Verge notes though, most of those features are gimmicks that have been tried by other companies. HTC is just combining them into a single device.

For example, LG was the first company to launch a ticker-style display for notifications and shortcuts, and it doesn’t really provide much functionality. The glass back looks nice, but as customers who have bought previous phones with glass on the back have found out, it breaks easily and smudges even more easily.

HTC does have one distinctly new feature which the company refers to as artificial intelligence, but which is basically just software that uses machine learning to figure out which notifications to push to the second display based on the people and activities you interact with the most, or use your past behavior and preferences for weather alerts, restaurant recommendations, and other information.

But HTC is hardly the only company pushing AI as a feature.

There’s a 16MP front camera and 12MP rear camera, and rumor has it that it’s the same as the camera used on the Google Pixel smartphone, which might make the camera one of the best things about this phone.

Those specs are pretty good by last year’s standards. But we’re expecting to see phones with Snapdragon 835 chips pretty soon, and there are a growing number of phones with 6GB of RAM or more. The battery is also on the small side for a phone with a large screen.

On the bright side, the HTC U Ultra is one of a handful of flagship phones with support for removable microSD cards.

The HTC U Ultra should be available in March, and it’s expected to ship with Android Nougat software.