Android phones with 64-bit ARM chips are coming. That’s not a big surprise, since mobile chip makers have been unveiling 64-bit processors left and right and Apple’s iPhone 5s already has a 64-bit processor.

But apparently the time for Android phones with 64-bit chips based on ARMv8 architecture is almost upon us… HTC has confirmed that it’ll unveil its first such device on September 4th. 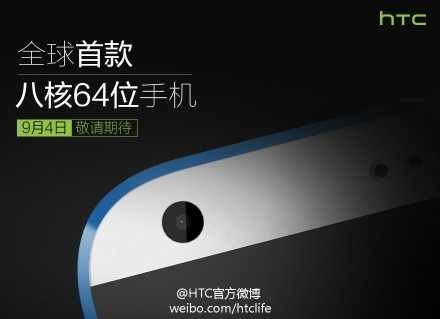 According to a post from HTC on Chinese social network Weibo, the phone will feature an octa-core, 64-bit processor. While HTC isn’t saying which chip… or anything else about the phone, there’s a good chance that we’re looking at a phone with Qualcomm’s new Snapdragon 615 processor for mid-range devices.

In a separate Weibo post, Qualcomm confirms that the first phone with a Snapdragon 615 chip is on the way.

That chip has 8 ARM Cortex-A53 processors and Adreno 405 graphics. We’ll have to wait until 2015 to see Qualcomm’s higher-performance chips based on speedier ARM Cortex-A57 architecture.

Rivals Allwinner, MediaTek, NVIDIA, and Samsung are all working on their own 64-bit, ARM-based processors.