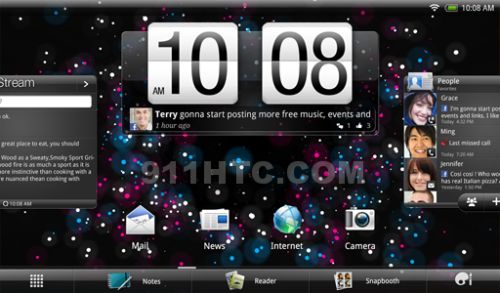 According a forum member, the tablet will have a 1.5 GHz Qualcomm MSM8660 dual core processor. It currently appears to run Google Android 3.0.1, although there’s always a chance HTC could update the software to Android 3.1 before launch. And it will have a 1280 x 800 pixel display, which is the same resolution as 10 inch tablets from Motorola, Samsung, Asus, and Acer.

The tablet is expected to have WiFi and 4G LTE connectivity, and it looks like it’s destined for AT&T’s network in the US. 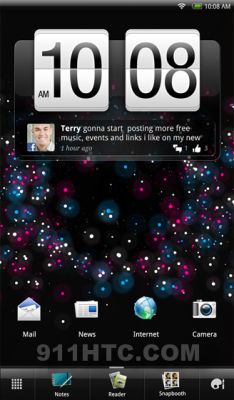 While the 7 inch HTC Flyer runs Google Android 2.3 and a version of the HTC Sense user interface optimized for tablets, the HTC Puccini will use a new version of HTC Sense designed to work with Honeycomb tablets. Interestingly, the screenshots show a status bar at the top of th escreen which looks a lot like the status bar on Android 1.x and 2.x phones. But this makes room for HTC’s custom app launcher at the bottom of the screen.

There’s also an icon in the app dock for a “Notes” application which shows a notepad and a pen — suggesting that like the HTC Flyer, the Puccini may be available with a digital pen for drawing and taking handwritten notes.