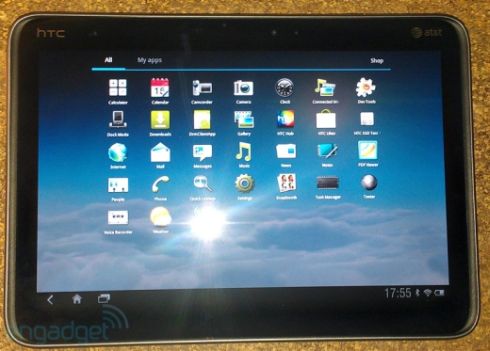 Since the HTC Puccini checked in at the FCC earlier this month, bits and pieces have been leaking out about the 10″ successor to the HTC Flyer. We’d heard it would ship with a 1.5GHz dual core processor, a 1280×800 pixel display, and Android 3.0.1. That, of course, would make it HTC’s first Honeycomb tablet. On the wireless side of things, support for AT&T’s speedy new LTE network was said to be in tow.

Engadget has now confirmed those details — and more — thanks to a slew of new photos of the Puccini out in public strutting its LTE stuff. The tablet, which it’s now thought will sell on AT&T as the HTC Jetstream, will indeed feature a 1.5GHz dual core Qualcomm processor, 1GB of RAM, 16GB of internal storage, an 8MP rear-facing camera and front facing camera for video conferencing.

We also got a brief look at the tablet’s software this month. It’s been tweaked slightly to fit the Puccini design, which unlike the Flyer lacks any hardware buttons. Like the Sony Tablet S, the Puccini’s on-screen keyboard features a numeric keypad and an updated version of HTC’s Sense UI will unsurprisingly be included.