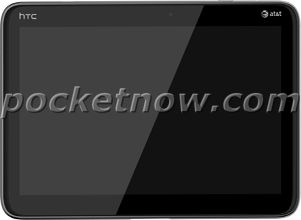 Phone-maker HTC’s first foray into the Android tablet space is the 7 inch HTC Flyer, which is set to go on sale later this month. But the folks at Pocket Now are reporting that HTC is also working on a 10 inch model known as the HTC Puccini.

Aside from the larger screen, it’s not all that clear at the moment what sets the Puccini apart from the Flyer, but the image would suggest that the new model will run Google Android 3.0 — since there’s no sign of the home, menu, back, and search buttons found on most Android 2.x devices.

It’s also likely that HTC will load a version of its custom HTC Sense software on the tablet — or at least some custom home screen widgets. Part of the reason the HTC Flyer runs Google Android 2.3 is because Android 3.0 Honeycomb hadn’t been available long enough for HTC to add its customizations to the operating system. So it makes sense that HTC would wait until launching a second tablet before moving to Honeycomb.

PocketNow also reports that the HTC Puccini will be compatible with AT&T’s new 4G LTE network which is rolling out this year, rather than the “4G” HSPA+ network AT&T is currently using.

One reply on “HTC Puccini 10 inch tablet on the way?”