HTC continues to milk its HTC One brand. This summer the company launched an HTC One Mini which looks like HTC’s flagship phone, but which features a smaller screen and slimmed-down specs.

Now meet the HTC One Max, a phone that has a nearly tablet-sized display.

The HTC One Max sports a 5.9 inch screen, front-facing speakers, a metal case that looks a lot like the one on the company’s smaller phones, and a few other new features including a fingerprint scanner. 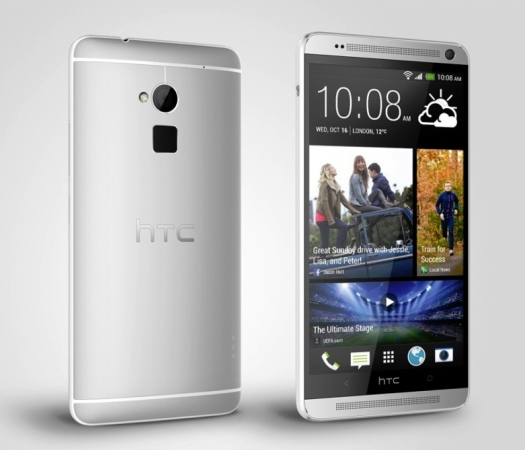 The smartphone has a 1920 x 1080 pixel display, a 1.7 GHz Qualcomm Snapdragon 600 quad-core processor, 2GB of RAM, 16GB to 32GB of storage, and something that the smaller models lack: a microSD card slot which you can use to add up to 64GB of additional storage. You can remove the back panel to get at the microSD card slot.

The HTC One Max features 802.11ac WiFi, Bluetooth 4.0, DLNA support, and has a microUSB port which can also act as an HDMI port with a special cable.

Tere’s a 2.1MP front-facing camera with support for HDR photos, and on the back you’ll find HTC’s UltraPixel camera which is a 4MP camera designed to take high quality images in low light settings.

The fingerprint scanner is also on the back of the phone, just below the camera lens. You can use it to unlock the phone or launch up to three different apps quickly by assigning an app to each finger.

HTC includes a 3300mAh batteryand also offers an optional HTC Power Flip Case, a protective case that has a built-in 1150mAH battery to give you extra run time. Unfortunately the built-in battery is not designed to be removed, so the flip case (or another external battery) is your best bet if the 3300mAh battery isn’t good enough.

HTC says the phone will start rolling out through carriers around the world by the end of October.

3 replies on “HTC One Max: 5.9 inches and a fingerprint scanner”