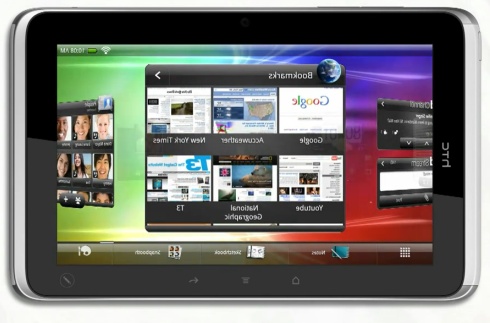 The HTC Flyer is expected to go on sale in April, but you can dig a little deeper into the 7 inch tablet’s capabilities today thanks to a 6 minute overview video on YouTube. The Flyer is one of the most unusual Android tablets expected to hit the streets in the coming months, which isn’t really saying all that much, since there are a lot of cookie-cutter tablets on the horizon. But the custom HTC Sense user interface, support for pen input, and a few other features make the Flyer stand out.

HTC describes the tablet as weighing about as much as a paperback book, yet being able to do “most things” you can do with a PC and more. I think the company might be taking a little artistic license there, but the tablet is certainly pretty versatile thanks to support for not just an on-screen keyboard, but also pen input in most apps allowing you to write or draw on a screen, highlight or annotate text, and link written notes and voice recordings to calendar appointments making the Flyer a good choice for taking notes at meetings or classes.

The video also does a good job of showing off the new version of HTC Sense with custom home screen widgets for accessing weather, social networks, browser bookmarks, and other areas of interest before you even launch a single app.

The Flyer has a 1.5 GHz Qualcomm Snapdragon single core processor, a 7 inch 1024 x 600 pixel display, front and rear cameras, and 16GB of storage. It runs Google Android 2.3, which means it won’t be able to run apps designed for Android 3.0 Honeycomb tablets. But honestly, there are only a few dozen of those available right now anyway.

Popular Elect is taking pre-orders for the Flyer for $899.99. Hopefully the tablet will be much cheaper when it’s officially launched in the US.