HTC makes smartphones. And HTC makes virtual reality systems. So you might think it would make sense for the company would develop its own phone-based VR headset to compete with Samsung’s Gear VR and Google’s Daydream View.

And you’d be right, because HTC just introduced one. The new HTC Link headset is also one of the first phone-based VR headsets to support 6 degrees of freedom motion tracking, although that’s a feature that should be coming to upcoming Google Daydream devices (including one from HTC).

But there are two reasons you might not actually be able to get your hands on an HTC Link anytime soon. 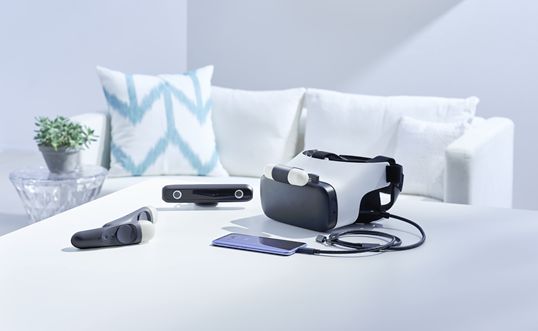 First, the headset only supports a single phone: the recently launched HTC U11.

Second, it will only be available in Japan, at least at launch.

The HTC Link, which is not being associated with the HTC Vive brand in any way, will also feature a special Ghost In the Shell-themed VR experience, and according to a spec sheet, it seems that the system comes with a set of motion controllers and features a stereoscopic camera.

Although it works with an HTC U11 smartphone, the HTC Link VR headset also seems to have its own built-in displays, with two 3.6 inch 1080 x 1200 pixel screens with a 90 Hz refresh rate and a 110 degree field of view.

The headset features a 2,800 mAh battery, a USB TYpe-C port, a 3.5mm headphone jack, and the system comes with a set of earbuds.