The good new is that AT&T is now offering HTC’s first 10 inch Android tablet. The bad news is that it will cost you $699.99 or more to get your hands on the HTC Jetstream tablet. 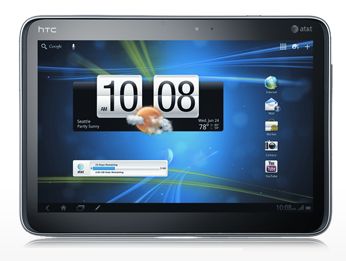 That’s how much AT&T is charging customers that sign up for a 2-year service contract. If you don’t commit to a 4G LTE data plan, the tablet is even more expensive, at $849.99.

This is the second Android tablet from HTC, a company best known for making smartphones. The first was the HTC Flyer 7 inch tablet. That model has a lower resolution display, a single core processor, and ran Google Android 2.3.

The Jetstream, on the other hand, has a 10.1 inch, 1280 x 800 pixel display, a 1.5 GHz Qualcomm Snapdragon dual core processor, and runs Google Android 3.1 Honeycomb. The tablet has 1GB of RAM, a 32GB hard drive, and a new version of HTC’s Sense user interface designed to work with Honeycomb. It has a 7200mAH battery which HTC says should provide up to 12 hours of run time.

The 10 inch tablet also has a capacitive touch panel with support for multitouch finger input, but there’s also support for a digital pen which allows you to write or draw on the tablet screen. AT&T is reportedly offering the stylus with the tablet for now, although it may be an optional upgrade in the future.

Measuring 9.9″ x 7″ x 0.5″ and weighing nearly 1.6 pounds, the HTC Jestream isn’t the thinnest or lightest 10 inch tablet around. But it’s one of the few Android devices to offer digital pen support, (even though most Android apps aren’t designed for this form of input) and it’s the first tablet to support AT&T’s 4G LTE mobile broadband network.