So you thought it was impressive when folks started porting Android 6.0 Marshmallow to run on the 2011 HP TouchPad tablet?

Recently we saw Marshmallow ported to the original Samsung Galaxy S smartphone from 2010.

But why stop there? Now you can also run Android 6.0 on the HTC HD2… a 2009 smartphone that originally shipped with Windows Mobile 6.5 software. 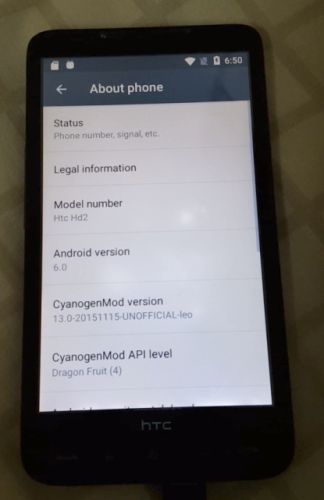 The HTC HD2 was the most powerful phone ever to ship with Windows Mobile, but it never received an official update to Windows Phone 7. So hackers stepped in and offered unofficial updates… a lot of them.

Over the years we’ve seen custom firmware that brings Windows Phone 8, Windows RT, and most major builds of Android including Android 5.0 Lollipop.

The first port of Android 6.0 comes from developer macs18max and it’s based on CyanogenMod 13. The display, WiFi, and audio all work, but at least for now you can’t actually use the HTC HD2 as a phone when running Android 6.0. It doesn’t support cellular voice or data features. There are also problems with Bluetooth, mass storage, and camera features.

Still, it’s impressive to see that this 6-year-old phone can run Android 6.0 at all!