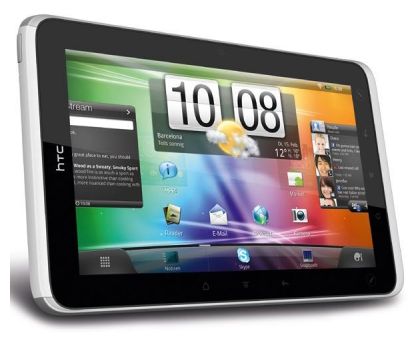 The HTC Flyer is a 7 inch Android tablet which is expected to ship soon. It has a 1.5 GHz single core CPU, a 1024 x 600 pixel capacitive touchscreen display and support for a pressure-sensitive stylus. Last week the tablet went up for pre-order at Amazon Germany for 669 Euros. But that’s the price for the 3G capable version of the tablet. Now there’s also a listng for a WiFi-only model.

German retailer Cyberport is taking orders for the WiFi model for 499 Euros, which about $685 US — although the price includes the VAT, which means the tablet will likely be much cheaper if and when it’s released in the States.

The HTC Flyer is notable not only because of its stylus support, but also because it will ship with Google Android 2.4 at a time when many tablet makers have their sights set on Android 3.0 Honeycomb. That’s because Android 2.4 Gingerbread is much closer to the smartphone version of Android that HTC has been working with for the past few years, and the company has developed a new version of its Sense user interface with new full-screen widgets to run on the tablet.

via Netbook News and TabletBlog.de