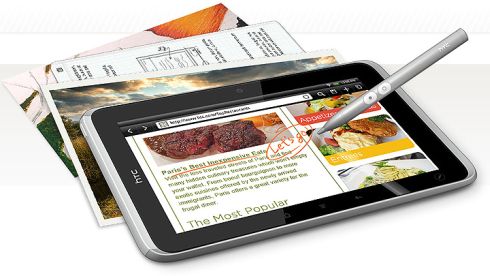 The HTC Flyer tablet went on sale today in a number of European countries including the UK, France, Germany, Italy. It’s not the cheapest Android tablet around, with a starting price of 499 Euros (or about $710 US), but the HTC Flyer does have a few things setting it apart from the crowd.

First, the tablet has a 7 inch, 1024 x 600 pixel display at a time when 10 inch tablets seem to be all the rage. So if you’re looking for something a little more pocketable than the Motorola XOOM, the Flyer might fit the bill.

Second, unlike the US version, the European model ships standard with a digital pen. The tablet has an active digitizer and custom software allowing you to take handwritten notes or draw with the pressure-sensitive system.

The HTC Flyer is also the first table to come with the new tablet-sized version of HTC Sense, complete with new home screen widgets and other custom applications.

On the down side, you don’t get Android 3.0 Honeycomb. The Flyer ships with Android 2.3 Gingerbread instead.

The tablet has a 1.5 GHz Qualcomm Snapdragon processor, and the base model has 16GB of storage space and 802.11b/g/n WiFi.

The HTC Flyer is also available with 32GB of storage and 3G options, with a top-of-the-line model running about 649 Euros, or more than $920 US.

Best Buy is expected to begin selling the HTC Flyer in the US later this month for $499 — but that price doesn’t include the digital pen.

The folks at SlashGear already got their hands on a UK model, and you can check out their unboxing video below.

One reply on “HTC Flyer tablet now available in Europe”